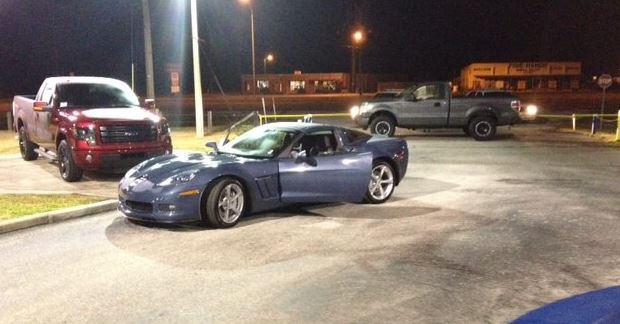 Annas Abdel-Khaliq, a resident of Marion County, Florida, was on the cusp of grand theft auto stardom until his inability to drive a stick-shift ruined his “plans” – plans is found in sarcasm-induced quotation marks as per the sheer stupidity of what was to follow.

Abdel-Khaliq, who attempted to steal a 2012 C6 Corvette Grand Sport residing in the service bays of Ocala Ford Motors, traveled a minuscule 100 feet before meeting his demise – or so was thought. Again, please remember the word “plans.”

When asked to get out of the vehicle by Sheriff Deputy Bloom of the Marlon County Department, Abdel-Khaliq went primal, grabbing a steel bar, before proceeding to strike Bloom en-route to the great escape. His bail-out plan worked a treat. Or it would have if it weren’t for an arriving Deputy Batts, who dealt the final blow with a potent blast of pepper spray.

You can not write better comedy if you tried. Unsurprisingly, this isn’t the first time we wrote about a car thief attempting to make off with a manual transmission Corvette and failing. And it’s just as bad as people getting stuck in Corvettes because they can’t figure out how to manually release the door. But at least nobody died this time.

Police recovered the steel bar and a pack of Pall Mall cigarettes from the scene, confirming Abdel-Khaliq’s bad-boy image runs deep. My only question is what good “plan” starts with trying to steal a Corvette from a well-lit car lot before making sure you could drive away, and ends with a misshapen steel bar, pepper-sprayed eyes, and a pack of old-man cigarettes in the evidence bay.

Rather than acquiring a new Corvette, Annas Abdel-Khaliq ended up with a grand theft auto charge, as well as aggravated battery – a pretty steep learning curve. Learning stick would have been easier.