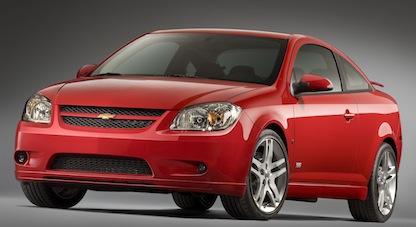 Update: GM has added four new models accounting for 588,000 additional vehicles to the recall, which now totals 1.37 million vehicles in the United States.

General Motors has just issued a mass recall to replace faulty ignition switches in nearly 780,000 Chevrolet and Pontiac vehicles. The suspect piece has been reported to fail, leading to the engine being switched off and resulting in a loss of power and the deactivation of protective airbags.

The automaker has reported five fatal incidents that led to the death of six occupants when involved in frontal-impact collisions. Though various factors such as alcohol, failure to utilize seat belts and irresponsible driving were said to occur during these accidents, one common factor attributed to the fatalities were deactivated airbags.

The General has claimed to know of 17 other related incidents which led to human injury caused by the defective ignition switch, with each of these non-fatal occurrences also taking in front-end contact. The defective batch of vehicles totals a whopping 778,562 units and includes some 619,122 Chevrolet Cobalt models from the years 2005-07 as well as its 2007-only twin, the Pontiac G5. Of course, both vehicles are long out of production.

GM representatives have stated that the ignition switches were not tightened fully, allowing them to shake loose in off-road scenarios or “jarring” situations. Inadvertently, this may have switched the ignition out of the engine on/drive position, resulting in the stoppage of essential electronic and mechanical systems, and the subsequent deactivation of the airbags.

General Motors was made aware of the issue by field reports, as the incidents have passed by the eyes of the National Highway Traffic and Safety Administration (NHTSA) due to the small numbers in the handful of incidents. GM had initially chosen to opt out of a recall, but once placed formally before the NHTSA, the company decided to take formal action.

Any authorized Chevrolet dealer (due to the now-defunct Pontiac brand) will be set to carry out replacement of the Mexican-made parts, and owners are advised to remove any unnecessary key rings or decorations, as these too were seen as factors in the listed events.

Acting quickly seems to be the intended route of the automaker, to firstly ensure the safety of consumers and, in turn, to hopefully nullify any negative publicity caused by the incidents. General Motors has not stated the cost of the widespread recall but we can be assured that it will set out to resolve these hazards regardless of the price.