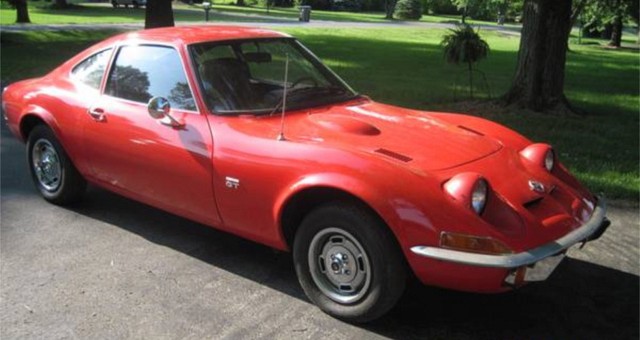 It is rare to come across a well-kept, rust free, bone stock Opel GT. Jalopnik recently stumbled across a mint condition example of the little Opel sports car for sale on Craigslist in Decatur, IL. and it seems we weren’t the only ones who found its $5,000 list price appealing, as the ad has since been taken down.

The Opel GT shared its under-pinnings with the rear-wheel drive Opel Kadett, though that is where the similarities ended. The GT’s styling is simple, clean and elegant, often being likened to a mini C3 Corvette. Under the hood, it had either a 1.1 liter, 67 horsepower four-cylinder or a 1.9 liter, 83 horsepower four-cylinder mated to either a 3-speed automatic or 4-speed manual transmission. Even though the car is a bit of a featherweight, tipping the scales at just 2, 138 lbs, the 0-60 time with the 1.9 liter engine was rated at 10.2 seconds and had a top speed of 116 mph.

The Opel GT found for sale on Craigslist has traveled just 38, 815 miles since it left the factory in Bochum, Germany in 1970. As a result, the seats, as well as the rest of the interior, appear to be in impeccable shape. There’s more good news on the outside too, the little red sports car is riding on the stock steelies and its gleaming red body appears to be rust-free.

So while this Opel GT is either sold or no longer for sale, it has provided us with the chance to appreciate its timeless good looks.  Would you pony up five grand for this immaculate 70’s sports car, or is that too much for a four-decade old, 100 horsepower two-seater?