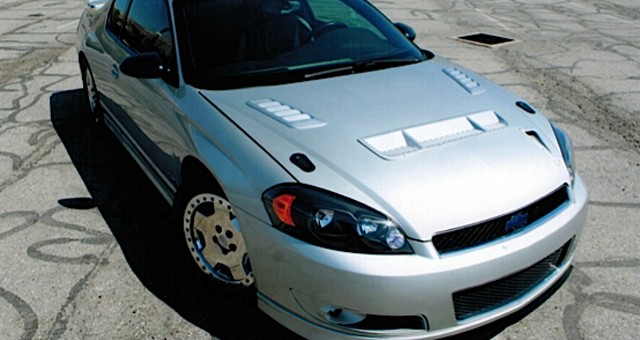 The 2006-07 Monte Carlo SS isn’t usually the platform most people start with when looking to make an 800 horsepower monster to attack the dragstrip. While it did feature a 303 horsepower version of GM’s 5.3-liter V8 engine, its front-wheel drive layout made it less than ideal for most people looking to go fast. But Sam Buscemi had a vision, a vision to take the 2007 Monte Carlo SS he purchased new and create an insanely quick, front-wheel drive bowtie-badged coupe.

“Sure, it would have been much easier and much less expensive to do this to a new Camaro, but I’ve always liked these Monte Carlos and it seemed like a worthy challenge,” Buscemi said. “Yes, maybe it was a crazy idea, but I think the results speak for themselves – it works, and it’s fast. Really fast.”

We believe Buscemi when he says the car is fast. He knew extracting 800 horsepower from the stock 5.3 liter engine would be nearly impossible, so he bought an all-new billet aluminium cylinder block based on the LS7. The engine uses a Callies Magnum crankshaft with a 3.750 stroke, 0.25 inches less than the stroke of an LS7, giving it a 6.6 liter displacement. For that extra bit of gusto, a single turbocharger was installed, creating a whopping 20 lbs of boost. The result is 813 horsepower and 768 lb-ft of torque. Again, to the front wheels.

Of course, with a car that powerful, everything else had to be upgraded too, which Buscemi says was the hardest part. Everything associated with the cooling, engine and drivetrain had to be replaced with aftermarket or custom fabricated parts. The axles were beefed up, as well as the suspension components after the stock lower arms bent on a dyno pull and the front wheels were pulled 1.5 inches forward.

Cooling was another difficult aspect of the build. The car is running a racing-style water pump and a Ron Davis radiator. Holes have been cut in the hood to make way for a hood extractor vent off of a GT500 Mustang, which helped to dispel of some of the heat produced by the turbo. The front fascia was switched with one off of an Impala, because surprisingly, it had larger openings for providing air to the cars heat exchanges.

GM High Tech Performance went for a ride in Buscemi’s insane creation and as it turns out, 800 front-wheel horsepower is just as hard to control as you think it is. They likened the ride to walking a mountain lion through a forest, it’s docile when you are just cruising along, but building the RPM’s is equivalent to trying to control the lion when a deer walks in front of it – it’s almost impossible.

“To be honest, after putting about 300 miles on the car, I’m still learning how to drive it,” Buscemi says. “It takes all your concentration, because if you’re not paying full attention, the torque steer and wheel spin will send you across the road immediately.”

So while its not the last word in performance or refinement, its a hoot to drive, and who can argue with that? Check out the full rundown of Buscemis insane front-wheel drive creation over on GM High Tech Performance.