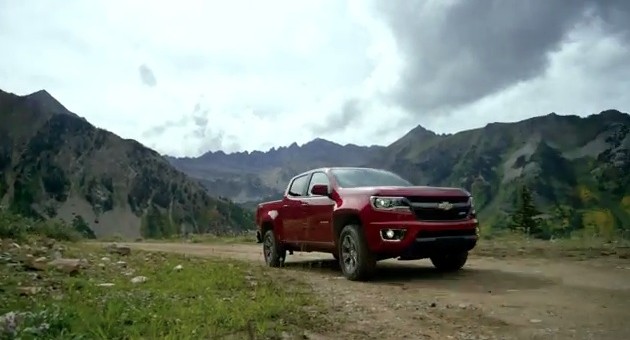 General Motors will take the wraps off the all-new 2015 GMC Canyon mid-size pickup, sister of the previously unveiled Chevrolet Colorado in a special event prior to the 2014 North American International Auto Show on Sunday. The pair of mid-size pickups represents the biggest differences in strategy ever between GM and the current king of the pickup truck segment, Ford.

GM’s North America President, Mark Reuss, admitted in an interview with the Detroit News that he knows GM is taking a chance with its three-size truck strategy. GM believes smaller pickups will offer its customers a greater variety of options and help the automaker meet federal fuel economy standards.

Following the unveil of the Canyon, Ford’s next generation F-Series pickup will bow at the 2014 NAIAS on Monday. The new F-Series is expected to shed up to 700 lbs. over the outgoing model thanks to the extensive use of lightweight aluminum body panels.

“This could be a defining moment for Ford and the truck segment as a whole,” Alec Gutierrez, an auto analyst at Kelley Blue Book told the Detroit News in a telephone interview. “One possibility is that brand loyalty holds true and F-Series holds steady. Ford could have a winning formula they actually start to conquest buyers. Or maybe the trucks don’t hold up as well, and Ford starts to lose share.”

Reuss said federal fuel economy standards played a large part in the company’s decision to offer midsize trucks. He said the Colorado is some 900 lbs. lighter than its full-size stable mate, the Silverado. GM’s chief truck engineer, Jeff Luke, said the anticipated EPA figures will top the fuel economy of the Silverado and Sierra as well as the old Canyon and Colorado, which had a claimed highway fuel economy of 25 mpg.

“If you look at this graphically and mathematically, you can’t get to an efficiency place that this truck is going to offer no matter what you do to a full-size pickup truck,” Reuss told reporters during LA Auto Show. “And so if you try and do it, all you’re doing is adding cost and not getting the return of the mass out of it.”