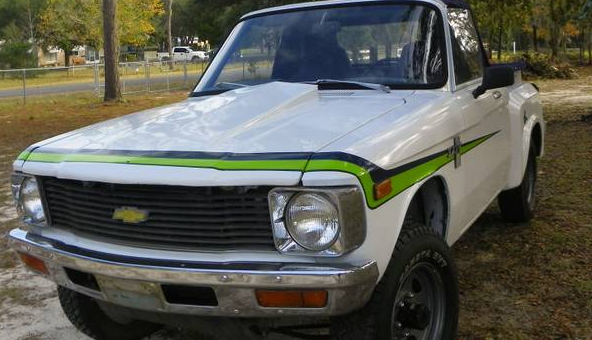 Do you remember the Chevrolet LUV truck? Way back in 1972, domestic automakers owned the North American truck market, but were losing market share to smaller, more efficient trucks, like those offered by Toyota and Datsun. General Motors answer was to call upon Izuzu, in which they held a stake at the time, to bring over the inappropriately named Izuzu Faster rebadged as the Chevrolet Light Utility Vehicle, or LUV for short. Thankfully, GM has rekindled its commitment in the small truck game with the likes of the 2015 Chevrolet Colorado and GMC Canyon, but a classic is a classic.

When introduced in 1972, the LUV truck had one engine option, a 1,817 cc, SOHC four cylinder that offered up a paltry 75 horsepower, which was mated to a four-speed manual transmission. Drum brakes all around (yikes) are tasked with stopping the little truck, not that you’d be going very fast as 0-60 took an estimated 18 seconds.

This 1980 Chevrolet LUV pickup is for sale in Daytona, FL. on Craigslist for a bargain – just $2,500. By the time 1980 rolled around, Chevrolet had squeezed 5 more horsepower out of the four cylinder engine, added four wheel drive, replaced the front drum brakes with discs and added independent front suspension.

This gleaming example has just 31,000 miles on the clock and a custom removable soft top. Do you feel the LUV?