The IMSA Continental Tire SportsCar Challenge will commence a soft-opening to the 2014 racing season, with a 2.5-hour endurance race ahead of the 52nd Rolex 24 At Daytona. And while the Corvette Racing C7.R is set to handle the duties of the 24-hour race, the new Chevrolet Camaro Z/28.R will battle in IMSA.

It will be Stevenson Motorsports and CKS Autosport who will utilize Z/28.R race cars in the GS class of the IMSA Continental Tires SportsCar Challenge this season. Impressively, the Z/28.R will be one of the most production-based competitors on the track, sharing aerodynamic, engine and axle components with the new 2014 Camaro Z/28.

In terms of aerodynamics, the Z/28.R will share the front splitter, rear spoiler with wickerbill, hood extractor vent, rockers, wheel-house extensions and front tire deflectors, as well as the belly pan with the production car. Propulsion will come from the same 7.0-liter LS7 V8 as what’s found in the production-spec Z/28, employing the unique, helical-gear limited-slip rear differential also found on the production model. So yeah, the car is pretty stock. 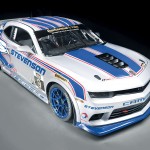 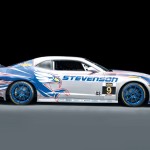 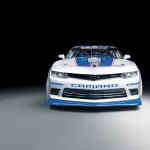