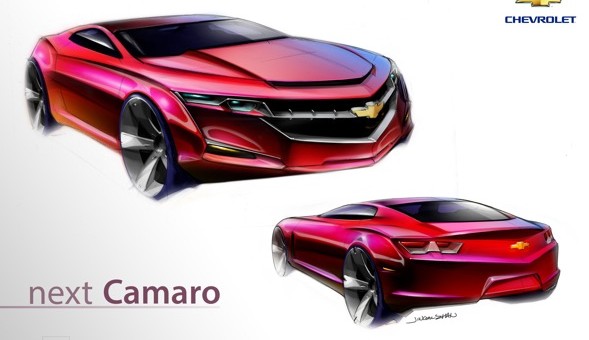 Following the first set of unofficial design renderings of the next sixth-generation Chevy Camaro is this second batch… and it is most certainly eye-catching.

The sketches seen here are somewhat of an evolutionary revolution — if such a thing ever existed — of the current fifth-gen Camaro, featuring aggressively-squinty front and rear fascias, a low roof line, and surface sculpting that whets our proverbial appetite, especially the intricate line from the front fender to the mid-door, along with the wide hips in the rear. Of course, those who thought that the 2014 Corvette C7 has “Camaro taillights” (it doesn’t) will unequivocally think that the sketch has Corvette taillights.

According to the Behance.com profile where we found the renderings, the creator is Jingxu Zhan from Detroit, Michigan. Having graduated from Shenzhen (China) Polytechnic Institute with a degree in Industrial Design in 2008, Zhan is currently pursuing a Master’s degree in Transportation Design from the Fine Art at College for Creative Studies, set to graduate in May of 2014. 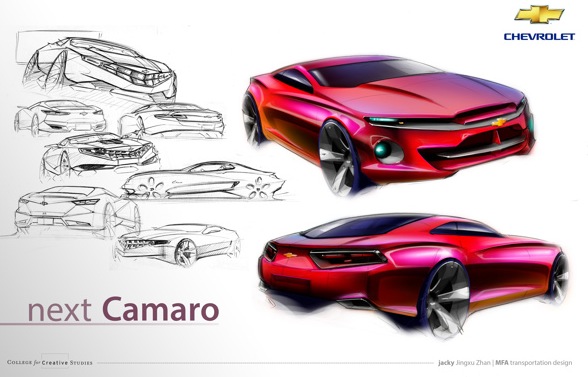 As a reminder, the next-generation 2016/2015 Camaro will ride on GM’s state-of-the-art rear-wheel-drive vehicle architecture known internally as Alpha and shared with the Cadillac ATS, 2014 CTS, and the returning Buick Grand National and GNX. The Chevy sports car is expected to decrease in size and shed weight, thereby addressing the biggest complaints with the current fifth-gen model.

Tells us what you think of the sketches in the comments below.