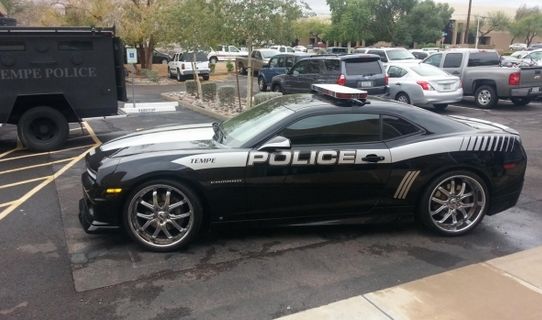 The police department in Tempe, Arizona has something a little more enticing than the usual Chevrolet Caprice PPV, Ford Police Interceptor Sedan (aka Taurus), or Dodge Charger in its fleet of police vehicles — a Chevy Camaro!

The story goes something like this: in 2009, the department seized this black 2010 Camaro SS during a multi-agency raid, which saw numerous arrests and search warrants carried out both in Tempe and in the surrounding area. The car had previously belonged to a high-level methamphetamine dealer but was seized when the police found it to be used in the carrying out of a crime, according to the State Press.

Naturally, this being a former drug dealer’s car, the Camaro has chrome Asanti wheels, a chrome Asanti grille, and a custom stereo system which the Tempe PD says was valued at about $10,000. The police department then spent about $1,500 to equip the car with police decals and a light bar — a bargain, considering the money needed for an all-new squad car.

Currently, the car is not used for patrol, or for chasing runaway criminals. It’s instead relegated to promoting the police department at local events and car shows, which is odd because we doubt very many law-breakers would attempt to flee if they saw this light them up in their rear-view.