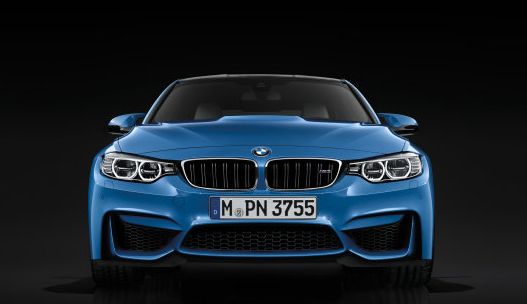 It’s no secret that General Motors aims to continue getting up BMW’s nose a bit with the 3-Series rivaling Cadillac ATS. But in order to really dethrone the king of the C-segment performance sedans, Cadillac must inject enough performance into the impending 2016 ATS-V to compete with the new F80 BMW M3 and its two-door counterpart, the M4.

BMW has officially announced the performance versions of its 2015 3 series and 4 series which launched earlier this year, and the performance figures are even greater than what we reported back in September.

The new twin turbocharged 3.0 liter inline six produces 425 horsepower across a broad rev range from 5,500 rpm to a high-pitched 7,300 rpm. That’s only five more horsepower than the outgoing e92, but the M3 has never been about raw grunt in the first place. That said, the turbo six delivers more in the way of torque too, producing 406 lb-ft from 1,850 rpm all the way up to 5,500 rpm.

On top being more powerful than the e92’s V8 (an amazing engine, that was also a total gas hog), the new inline six is more economical as well. BMW claims a fuel efficiency increase over the outgoing M3 of 25 percent as well as a 25 percent drop in emissions.

Another contributing factor to the performance of the M3 will be it’s low curb weight, tipping the scales at an impressive 3,300 pounds, or about equal to that of the 2014 Corvette Stingray. The increase in power and decrease in weight translate to a 0-60 time of  4.1 seconds for the standard manual transmission and 3.9 seconds for the available dual clutch.

BMW used a carbon fiber reinforced plastic in certain components to save weight, including in the driveshaft and front strut-tower brace. Additionally, the roof is carbon fiber and the suspension components are aluminum, all in the pursuit of lightness.

The M3 also makes use of aerodynamics for improved downforce, while not appearing to come off too much as a raw race car. The front apron, smooth underbody and integrated rear spoiler provide equal downforce in the front and the rear, while the M gills in the side help expel air from the front wheel arches.

While we don’t know too much about the impending ATS-V, we’re confident that Cadillac is keeping a close eye on the new M3 while continuing to develop it’s mid-size performance offering. The ATS-V will reportedly have as much as 500 horsepower, so it might already have the straight-line speed bragging rights in the bag.

The new M3/M4 is set to bow at the 2014 North American International Auto Show in Detroit next month and is expected in BMW dealers by early Summer. GM has remained tight lipped about the ATS-V, though it’s only a matter of time before a tale of the tape for the two welterweights is conjured.