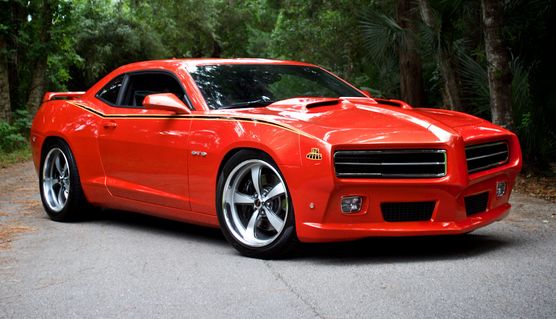 Although Pontiac hasn’t had any offerings in a few years, that doesn’t mean that the loyal aftermarket should ignore the fanbase. As you should probably know, SEMA is the best place on earth to display custom cars, with insurmountable amounts of money invested into them. Under that logic, it only makes sense that the 2014 Pontiac GTO “The Judge” Camaro was featured there.

A company by the name of Trans Am Depot has performed one of these incredibly thorough conversions, adding flair all over the place, from performance parts, to paintjobs, to new seats. The particular specimen for sale right now started off as a Camaro SS at about $35,000. After all of the modifications were complete (totaling at $44,985), the price for the reborn GTO finished at $79,985, according to the listing.

Sure, you could buy a loaded C7 Stingray at that price (if you like waiting), but it’s not quite as unique as a custom-built Chevy/Pontiac, long after the brand is gone. So, if you had the money (or even if you already do), would you like to see this SEMA-worthy frankencamaro in your driveway? Let us know.