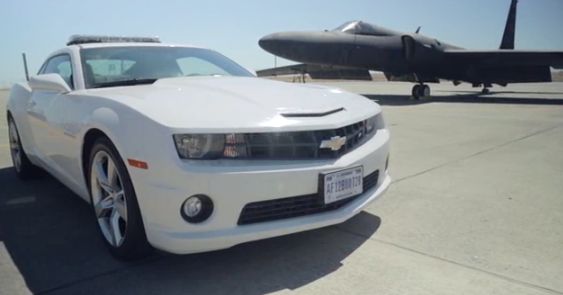 The Lockheed U-2 spy plane, capable of flying altitudes up to 70,000 feet, appears to be simply a glider with a turbine, yet is an important tool for gathering intelligence for the U.S. government. In fact, the U-2 has been in service since 1957 and is still active today.

The U-2 achieves it’s incredible flying altitude from its extremely low weight and high lift wings. As you can imagine, the designers of the U-2 worked mercilessly on making the plane as light as possible, and as a result it ditches the typical tricycle style landing gear you’d find on a normal plane in favor of a two wheel, bicycle-style setup.

Because of the less stable setup, the plane has gained a reputation for being one of the hardest planes in the Air Force’s fleet to land. The lighter bicycle-style landing gear led to an unusual –albeit awesome, and very American solution. Muscle cars.

Check it out below in this episode of Motor Trend’s The Down Shift. It might not be too focused on the cars, but this episode contains some really epic footage.