To call Hit & Run a great car chase with a story line and some dialogue is almost definitely a misrepresentation of the movie. No, the film, from the producers of Wedding Crashers and written, directed by, and starring comic talent Dax Shepard, is so much more than that, presenting the broad topics of love, trust, betrayal, wanna-be-gangsters, and guns. Sure, it has some pretty incredible car chases featuring four GM vehicles (a Corvette C6 Grand Sport, CTS-V Wagon, Pontiac Solstice, and Impala PPV) — and that might be all that you need to know to watch the film. Those of you who need to know more, read on; those who don’t, just scroll down for the trailer.

The plot involves Charlie Bronson, a nice guy with a questionable past (Dax Shepard), who ends up risking everything to deliver his fiancé Annie (Kristen Bell) for a once-in-a-lifetime job opportunity in Los Angeles. The road trip, which first takes place in a tuned and (let’s be honest) impressive 1967 Lincoln Continental and then a Corvette C6 Grand Sport, gets inconveniently complicated when the couple is chased by an ex-boyfriend (of Annie’s) and the feds (played by Tom Arnold). The danger-meter rises to off-the-chart levels when Charlie’s former gangster friends (led by Bradley Cooper) catch up.

Besides the sinister ’67 Continental, the four GM vehicles, and theentertaining chase scenes involving the Vette and the CTS-V as well as another with the Solstice and the Linc, the film also has several hilarious one-liners, like the following gems:

I “Can’t believe this is a fu##ing station wagon. This shit is so fast.”
– Allen

Innocent by-stander, in reference to the 1965 Continental: “Does it have nitrous?”
Answer (by Shepard): “Nitrous is for fags. It has cubic inches.”

There’s also a Tatum, an epic burnout, plus some gun-shooting, nose-breaking, engine-stealing, and car-talkin’ by an idiot who doesn’t really know what he’s talking about (we’ve all met that guy). And the the U.S. Marshall is a total mess-up who drives around in a Dodge Caravan “at Nascar speeds” with a free-rolling bowling ball in the trunk that’s been itching to turn itself into a shooting missile out of the windshield. All of this is done to a comedic tone, which could just make Hit & Run that perfect “car chases meets funny storyline” flick.

Mind you, the Caddy is carrying three gangsters

So, if you’re looking for something fun to do this weekend (or whenever), renting and watching Hit & Run with your friends, significant other, and/or family (you be the judge whether it’s ear-muff safe for the kids) should be at the top of your list. Here’s the trailer: 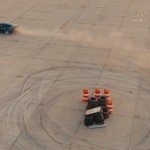 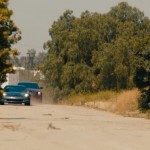 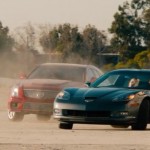 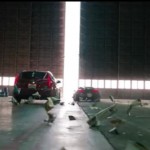 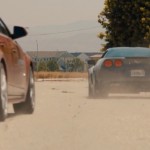