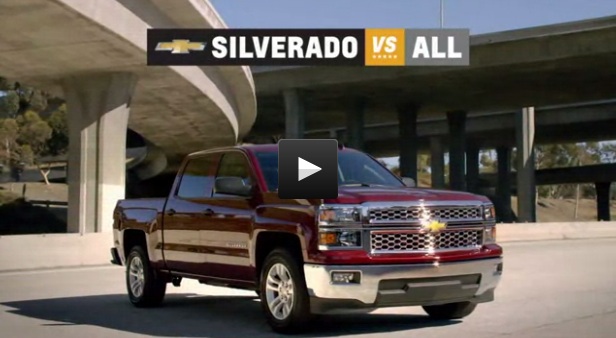 The following comes to us from Gabriel O:

I don’t know if you are familiar with the chevy truck ad where the guy is underneath a highway and he gets inside the Silverado to eliminate the noise, then he says “Chevy Silverado delivers a quiet cabin that’s second to nobody in its class… and by nobody, I mean Ram and Ford”.

It’s simple grammar, really, and with the budget GM works with, they should use it to hire smart people, especially when they’re on the offensive. This just makes them look stupid.

I have been watching this ad during the playoffs and find it funny. Maybe I should contact Ford to let them know they are being promoted by a competitor… maybe they will use it.

Gabriel presents a rather interesting grammatical situation — and we tip our proverbial hat to him for bringing this up in the first place. Here’s the ad in question:

It’s easy to see what the ad’s authors were going for here, but as Gabriel points out, it doesn’t make much sense. Sure, the phrase “second to nobody” means that whatever is being mentioned is the best, number one… supreme. But when the word “nobody” is defined, as it is in this commercial, to mean Ram and Ford, then the phrase takes on a whole different meaning, which is that the K2XX-based 2014 Silverado’s interior is “second to nobody”, where “nobody” is defined as the brand’s competitors.

In that regard, I agree that the ad copy could have been written in a more clever way. If it were up to me, the spot in question would read:

“Chevy Silverado delivers a quiet cabin that’s second to nobody in its class… especially Ford or Dodge”.

That would communicate the same general message, while actually presenting the competition in a negative light. Perhaps a revision for the ad is in order.