In its defense, the 2013 Chevrolet Malibu wasn’t a terrible car. It was the quietest car in its class, and came with a suite of technologies that were standard.  The issue was that the sedans that were rolling out from other camps were such improvements over their predecessors, that they left the marginal improvements (and in the case of rear legroom, a regression) of the new Malibu in the dust on paper, and the biggest loser in many high-profile comparison tests. And thus, sales tumbled.

This pressure sent General Motors hustling to alleviate the problem, and their solution is the restyled, recalibrated  and otherwise refreshed 2014 Chevrolet Malibu. But was the pressure enough to make a diamond? I drove it this week to find out.

Approaching the front of the 2014 Malibu will show the changes instantly. The entire fascia, save for the lights, were revised from the rather unmotivated mug to a more eye-catching clip, and is most welcome. Now, Chevrolet will insist that it borrows styling cues from the 2014 Impala, a vehicle that’s received rave reviews (and ironically shares the same architecture as the Malibu), but I just don’t see it as much as they assert it. Regardless, it’s still easy to tell that the 2014 Malibu is a Chevy from the outside.

Inside is a revised center console, with two “mine and yours” cupholders and cell phone holders. There’s also a more cost-effective manual hand brake, opposed to the outgoing models electronic switch. There’s also more room in the rear seat for knees, but that doesn’t exactly spell more room for feet. That said, taller occupants will find more comfort in the back than before. 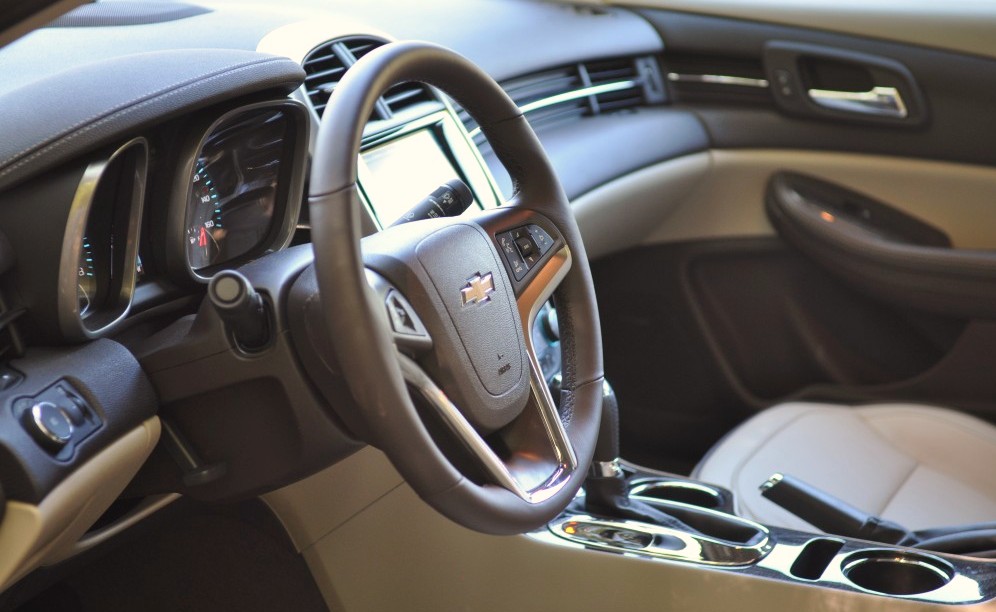 Importantly, the base 2014 Malibu with its revised 2.5L Ecotec engine equipped with start/stop technology comes in with a very sufficient 196 horsepower and adequate 186 lb-ft of torque, which returns 36 mpg on the highway and 25 mpg city, an improvement of 2 mpg on the highway and 3 mpg in the city from the outgoing model. How do those numbers stack in terms of base powertrains compared to rival midsizers? Frankly, it manages the Ford Fusion, Toyota Camry, Hyundai Sonata, Kia Optima, and only slightly behind the Honda Accord in city mileage. Yet new entrants such as the Nissan Altima, and the amazing Mazda 6 remain ahead of the 2014 Malibu. That said, the Malibu’s start/stop system is the first to be offered standard in the segment, and its ratings were good enough for GM to discontinue the poor-selling eAssist model entirely. After my time with the 2014 Malibu, it was this base powertrain that I found most memorable, as engineers did a great job in re-tuning the driving experience.

The electronic steering system in the 2.5L Malibu was tuned to require more engaging effort in its movement than before, and the six-speed automatic transmission shifts quicker and smarter than before. But what I liked the most was the pedal feel. Throttle delay makes an entire car feel sluggish and detached, and is a symptom that the 2014 Malibu is wonderfully absent from, though engineers took heed on making sure the pedal wasn’t overly sensitive. The revised throttle response borders on sports-car-like, but I’ll stop short of saying it’s some sort of sport sedan. It’s still very much a practical midsize sedan, just sharper, even around winding roads. Yes, engineers re-tuned the suspension system, as well, borrowing what was learned in the 2014 Impala to deliver a more refined damper calibration.

Meanwhile, the 2014 Malibu Turbo is graced with GM’s new LTG 2.0L turbocharged four-pot, and gives the sedan a very stout 295 lb-ft of torque. 0-60 comes in at 5.9 seconds — quick for the segment — while returning 30 mpg highway as a trade-off for the power upgrade. The recalibration was otherwise not as drastic as what we found in the base model, but for those who want a Chevy sedan to scoot around in from traffic light to traffic light, this would be the one. But Chevrolet is expecting 85-90 percent of sales to account for the 2.5L model.

The 2014 Chevrolet Malibu also introduces Siri integration and hands-free texting to the midsize sedan segment. Those with current Android phones may find the process a tad less tedious than those with Apple products, but that’s what Siri integration is for. Simply pair the phone in just a few seconds, and a “Messages” icon appears on the Chevy MyLink screen. Every message received that point forward can be read out loud by the car, which will notify you when a message was received. Drivers can reply with pre-programmed messages, or new ones they come up with themselves — all without looking down at their phone to do so. Hopefully nobody is in the car with you when you open up the inevitable lewd message, or you’re in for a seriously awkward drive.

Those who do stick with the base powertrain will find that it starts at $22,140, and another $825 for the destination fee. That’s an increase of less than $150 compared to the 2013 model, yet nearly $1,000 under the underwhelming eAssist model, while returning nearly identical fuel economy figures.

Do, does the 2014 Malibu shine on like a crazy diamond in the mostly colorless midsize segment? It’s definitely brighter than before, and, should you be in the market for a car like this, will more than likely catch your eye. 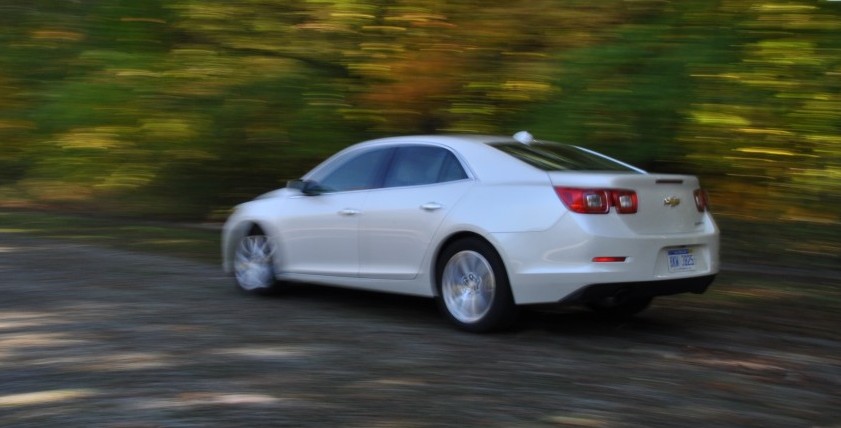