The Buick Regal stands as one of the most approachable sport sedans on the market. And in Regal GS form, it possesses maneuverability characteristics of what can only be described as comparable, and in some cases better, than coveted European sport sedans. Yet when one purchases such a vehicle from the Old World, they also tend to emanate the aura of general hive-minded douchiness, regardless of how well they handle. The Regal is cursed with no such stereotype, and is a perfect sedan for those who appreciate a decent driver’s car while managing to stay under the radar. Having the Buick emblem in front of its waterfall grille helps in that regard.

Buick’s marketing has also done a good job with not presenting the brand as another blue-blooded luxury nameplate, helping the Regal maintain the welcoming persona shared with the rest of the family, while remaining the distinct athlete of the portfolio, despite not being a sales champion. Though for the 2014 model year, the Regal rejuvenates itself with sleeker looks, a more refined interior, a power upgrade for the Turbo model, and all-wheel-drive for the GS model, coupled with re-tuned suspension work to optimize handling.

Do all of these sub-components come together in a desirable way? In short, yes.

Two things really play in the 2014 Regal family’s favor. One: it handles beyond the casual paces of what 99% of Buick drivers will put it through. And second, it has the best HMI setup of any GM product we’ve tested so far. There seems to be a perfect amount of buttons to go with the touch screen, which are far easier to adjust while driving than anything requiring a tap or swipe. And because tablets aren’t meant to be operated while driving, center consoles in modern cars shouldn’t be designed after them. So we commend Buick’s designers and engineers for not going that route.

As for the handling. While the base 2014 Buick Regal did well for a FWD midsize sedan in the bends of Kentucky’s mountains, the 2014 Regal GS is downright crisp, and one hell of a sleeper sedan for those looking to outrun most other FWD-based sedans in a winding road. Add the available all-wheel drive to the mix, and the 2014 Regal GS provides even greater cornering abilities and an electronic limited slip differential, though there is the compromise in weight. As for those who wonder why the more powerful, 325 hp, 321 lb-ft 2.8L turbo V6 from the Opel Insignia OPC didn’t make its way stateside into its American counterpart, I’ll tell you. The 2.8L turbo is not the good of an engine, speaking from experience when it was briefly in the Cadillac SRX. Power delivery is smoother with the turbo-four, and the fuel economy numbers aren’t dismal, either, at 21 mpg city and 31 highway with the FWD version with the six-speed manual transmission. And no, the stick isn’t available with AWD.

For those in the market for such a sport sedan, the 2014 Buick Regal begins at $30,615 plus destination for the Leather Package. The Premium I package comes in at $32,585 which offers either the 2.0L turbo or the unchanged eAssist powertrain. The 2014 GS model starts at $37,830, which is close to that of a mid-range trim Audi A4, the vehicle that GM benchmarked for the Regal GS. With that in mind, the Buick Regal GS is the more subtle alternative to the mainstream, without really sacrificing anything in terms of driving dynamics. 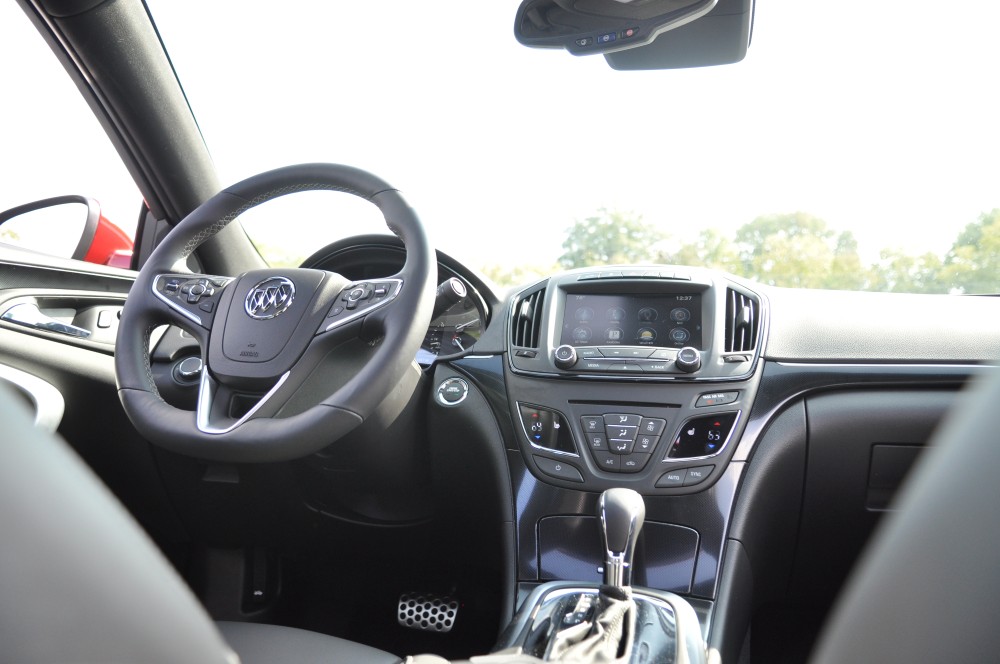