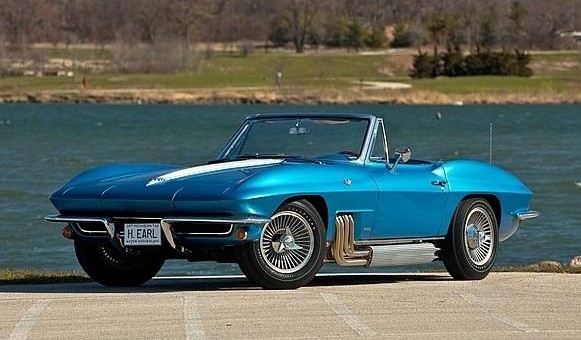 With the C7 becoming available to the public, it seems like Corvettes are gaining more and more value, especially the coveted classics. Just recently, a 1967 Corvette L88 set the world record for an auction price (of a Corvette), at an astronomical $3.2 million. That’s 45 Z51-packaged C7 models, at a $70k pricetag, which is significantly above the Stingray’s starting MSRP.

Although the 1967 model may have reached the top, there’s some speculation that Dana Mecum of Mecum Auto Auctions will try to defeat his own personal record that he set earlier this month with a different model on Saturday, October 12.

The particular Corvette in consideration is that of the late and great GM Vice President of Design, Harley Earl. If you’re not familiar with Earl, let us give you a bit of background – He’s one of the fathers of the Corvette, and helped introduce it to the public in 1953. It’s a custom 1963 Corvette that was given to Earl by GM honoring his contribution to both the Corvette and company as a whole.

His personal specimen is a fine one indeed. Featuring a Nassau Blue exterior, 300 HP, and a soft top, it’s something special. The tailored elements include a stunning through-the-body side exit exhaust, special gauges which included an altimeter, accelerometer, inside/outside temperature, and vacuum pressure. In addition to the slew of gauges, the car has stainless steel door and foot well inserts and plush carpeting, custom blue leather seats with white trim and dual circuit 1965 style 4 wheel disc brakes.

The car itself has an interesting history, especially after being sold by Earl sometime in the late 1960’s. In 1973, it was purchased at a bankruptcy sale for $1500 by a amateur racers who originally intended on racing the strange car. But before they began their project they decided the car might be significant, so they let it sit for about seven years.

In 1980, the would-be racers took the car to “Corvettes at Carlisle” and offered it or sale. The car received a lot of attention (probably due to the looks), although there were no buyers. One enthusiast, Joe Clark, was particularly interested in the car since it was a sort of white elephant having a 1963 VIN and several 1965 components.

Though he did not buy the car at Carlisle, Clark could never forget it. Research told Clark the car resembled the Chicago 1963 show car, and he then decided that the Corvette was more than a crazy attempt to copy the show car. He arranged to have the car reinspected in 1981, and after negotiations with the owners, he bought the car. One evening while Clark was dismantling the car with Ken Heckert, another Corvette enthusiast, he discovered a hand-written number code inside a certain door trim panel: S.O.10323. After getting some help from GM and Chevy to identify the car, he found that it was in fact the car owned by Harley Earl himself.