You’re not allowed to call yourself a motoring enthusiast you attend a meet of some kind. It’s there where you see the creativity and passion for the automobile flourish. And it usually opens your eyes to something you’ve never seen before, a vehicle’s original paneling completely replaced by wood, or a paint job with colors you can’t even put into words. It also brings about a sense of community among vehicle owners, who would normally never associate with each other. But when there’s a common goal in mind, such as a world record, differences are put aside, and that guy who owns the vintage C-10 Chevrolet Silverado Stepside with a wood bed floor just might park next to the low-rider GMC Sierra with Corvette tail-lights embedded into the tail-gate.

We attended such an event over the weekend in Fort Wayne, Indiana, at the Allen County Memorial Coliseum parking lot, driving a brand-new 2014 Chevrolet Silverado LT Crew Cab from Metro Detroit.

Our Silverado tester was one of 272 pickups in the General Motors Truck Homecoming Parade, celebrating the production commencement of the 2014 Chevrolet Silverado and GMC Sierra 1500 pickup trucks at the Fort Wayne Assembly facility (Silao, Mexico was the first GM truck plant to go online with the new trucks), which is actually in tiny Roanoke, Indiana and not Fort Wayne proper.

Invitations were sent out to GM truck owners within a 100 mile radius prior to the event, but word traveled beyond that range, and truck drivers from all over the midwest showed up, including us. In total, 272 GM pickup trucks, spanning generations, lined up for the parade, which spanned over four miles. We’re still not sure if there was an actual homecoming queen or not.

Despite all the effort, the attendance was short of the 386 trucks needed to at least tie the record. But with country music blaring, and product officials at hand to discuss the new GM pickups, everyone seemed to have a good time regardless. 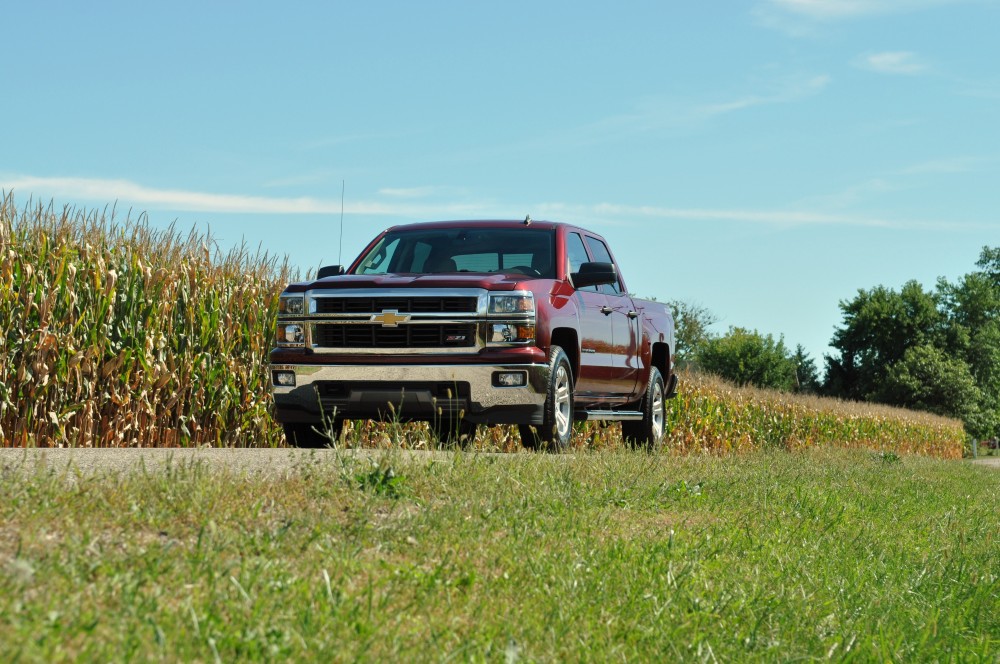 As for our 2014 Silverado LT Crew Cab equipped with the All Star package, a Z71 off-road package, and the LT Plus package, we’ve never come close to a quieter ride experience with a truck. It’s baffling. Whatever aerodynamic and sound-proofing sorcery General Motors is using to make these behemoths so hushed on the highway from both inside and out is enough of a mind-bender to make you smile. Equally pleasant is the fuel economy. We averaged 22.1 miles per gallon on our drive down, which could have been even better if we slowed down a bit. At speeds ranging from 55-60 miles per hour, however, we observed highway mileage climb and hold between 26-28 mpg. This is with a pickup truck that cradles the new 5.3L EcoTec3 V8 with a substantial 355 horsepower and 383 pound-feet of torque. That power was sent only the the rear wheels in our Silverado, with a more direct and immediate throttle response than before. The electric steering is also sharper than the old unit by a lot, and the Z71 Rancho shocks softened up whatever coarseness the road presented to us. The trade-off is, of course, a slushier feeling otherwise. But this is a truck, and it behaves like one, so there’s really nothing to hold against it in that regard. Also compared to the outgoing model, it’s more proportionate to the HD version with its taller hood height, and therefore feels and looks bigger than the outgoing Silverado 1500.

There’s also a bevvy of bells and whistles that serious truck owners will thoroughly enjoy. Features like the power rear window, an LED light shining into the cargo box for nighttime loading and unloading, movable upper tie-downs, integrated rear bumper corner-steps, a rear-vision backup camera, chromed assist steps running along the sides the truck, trailer braking control, trailer sway control and hill start assist, adjustable pedals, the latest Chevy MyLink system, a 110-volt outlet and heated seats. There’s even more options for higher end models, such as an integrated center console that can swallow a laptop, along with bucket seats (ours had a bench). All of these options add up, however, As our truck came in at $40,910. Leather not included, satellite navigation not included. Regardless, it’s still the most thought-out truck GM has ever produced, and it should be approached as such.

Hopefully there’s another parade next year.