One could make the argument that the 2014 GMC Sierra Denali is more of a 5-to-9 truck, rather than a 9-to-5 truck. That the Denali pickup is more of a status vehicle than a work vehicle. In many eyes, that’s exactly the case. Yet there’s no shortage of features or capabilities in the all-new Sierra Denali that would keep the truck from getting its 20-inch chromed wheels dirty.

Like the rest of its GM K2xx half-ton brothers, there’s the Corner Step bumper, EZ Lift and Lower tailgate, an LED spotlight that will shine on the truck bed,  trailer sway control, rear park assist, the Safety Alert Seat, lane departure warning and forward collision alert, hill start assist to quell rollback, more USB ports than a Macbook, power outlets to even power said Macbook, and even the storage bin space to place one. And so on, and so forth.

But because this is a Denali, the aesthetics are dialed up wherever they could be. The bumpers now match the exterior of the rest of the body in a subtle way, rather than utilizing a chrome finish, whereas the signature chrome Denali honeycombed grille pronounces to onlookers that this is a truck well north of $45,000 (the one I tested was $56,330, while 2014 Denali 1500s start at $47,810). Too much for a pickup? Not according to what the market is saying, as 30% of all GM trucks sold last year had an average transaction price of $40,000 or more. Ka-ching.

Under the hood, buyers can choose between the powerful, yet efficient 5.3L EcoTec3 V8 motor with 355 hp and 385 lb-ft of torque, or opt for the burlier 6.2L V8 “L86” with a class-leading 420 hp and 460 lb-ft. Driving the 6.2L is just as linear as the 5.3L, though everything is escalated across the power band. The exhaust note is more pronounced at full throttle, but remains as refined and as quiet inside the cabin when cruising normally as with the smaller V8. The 3.42 axle ratio combined with the well of torque from the L86 means plenty of power down low, and maintaining that power through the RPM range. Off the line, this truck feels like it will run away from anything else its size from the factory, and maybe even some sportier midsize sedans. 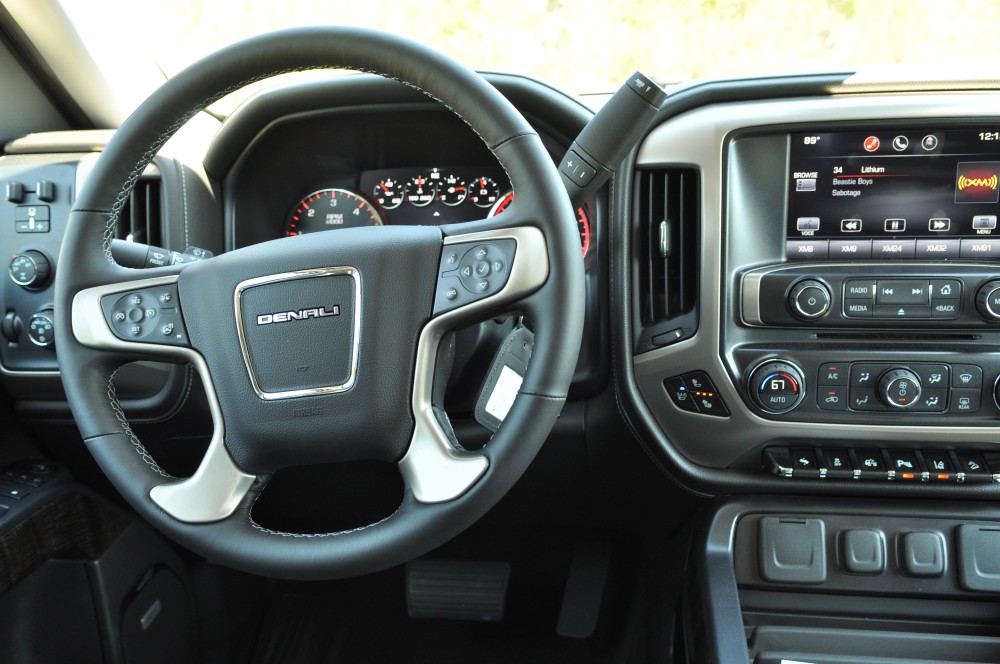 Compared to the smaller 4.3L V6 and 5.3L V8, the 6.2L V8 is not FlexFuel capable and therefore cannot consume E85. Instead, this 11.5:1 compression engine (the same compression ratio as the 2014 Corvette Stingray’s LT1) recommends premium fuel for optimum performance. Such is the trade-off for such impressive power. As for fuel economy, the official numbers haven’t been estimated yet, and it was difficult to even get an accurate estimation, as the low-speed, undulating roads along the planned route weren’t a good measure for neither city nor typical highway driving. So we’ll just have to wait until fuel economy testing is completed.

On the inside, black leather meets black wood, and accented by white stitching. The seats feel like executive office chairs, and the digital instrument panel is a nice touch that Sierra Denali owners can also call their own. Driving the 2014 Sierra Denali 1500 was a calming experience, as the truck flowed through the hills and bends of the rural Austin, Texas roads, and the cabin maintained the promise of serenity from wind and road noise. In fact, GM implemented Active Noise Cancellation (made possible via the mighty Bose sound system) to hush the outer elements even further than the more basic GMC trucks, which are already very quiet.

The steering of the Sierra Denali, compared to the Ram and Ford trucks that were also on-site for journalists to test, felt more in-tune and taught than its cross-town rivals, especially the Ram, which felt shamefully mushy (though we enjoyed the visibility in the Ram over the GMC, thanks to its sloping hood design). Also, the cooled leather seats were my best friend in the unrelenting Texas heat. 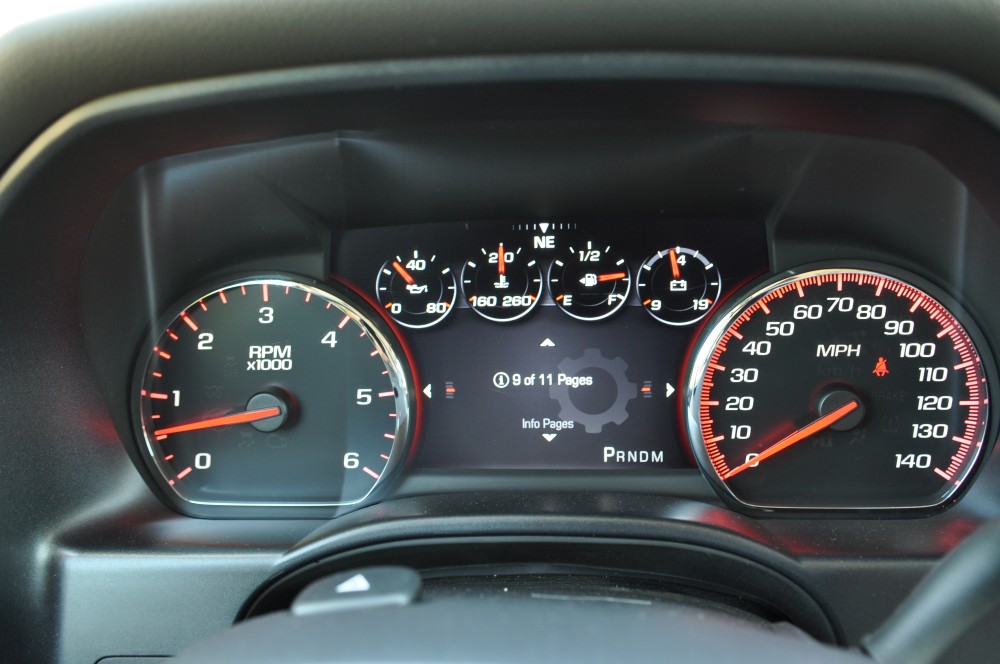 Still, the 2014 Sierra Denali left us wanting a little more differentiation on the inside than a subordinate trim level, such as the very well done Sierra SLT, which some may find to be well-done enough to be encroaching on the Denali. Yes the featured leather, wood, stitching, and digital instrument panel are unique to the Denali, but what about the possibility of a push-button start and a more extensive use of premium materials over plastic? Or perhaps something besides the column-mounted shifter, such as a knob (in the case of Ram), a gear lever integrated in the center console, or even a row of gear-selecting buttons? Or how about a Heads Up Display? There’s already a flashing indicator beaming onto the windshield for the Forward Collision Alert system, so a HUD doesn’t seem to be over-reaching.

That aside, there’s little else left to be desired here that isn’t already provided. The truck looks amazing from hood to hitch, features class-leading engines, is currently the most refined truck in the segment, and is well behaved either under stress or unladen, while possessing a plethora of intuitive features to make the job easier. In short, the 2014 GMC Sierra Denali 1500 is the last word in luxurious labor, just as its predecessors were before it.