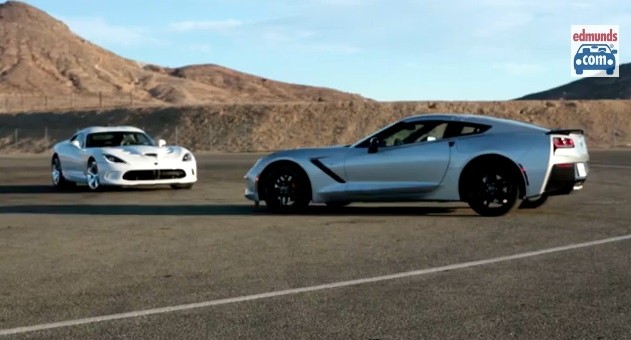 The fine lads and lasses at Edmunds.com took the 2014 Corvette C7 Stingray coupe and SRT Viper coupe to the track to conduct a series of instrumented performance tests, including 0-60 and quarter mile sprints, braking trials, slalom rounds, and skid pad runs. The results were rather interesting:

Both cars leave the line at the same rate and are in a dead heat until about 40 mph. But then it’s game over for the C7, which requires a shift to second gear to reach 60. What’s more, the C7′ 6.2 liter LT1 V8 making 450 hp is at a horsepower disadvantage to the Viper’s monstrous 640 hp 8.4 liter V10, another reason for the Vette’s loss in the test. At the end of the day, the Viper reaches the coveted 60 mph mark 0.6 seconds faster than the C7.

The Viper’s power advantage continues to triumph the Vette in the quarter mile drag, edging out the Stingray by 0.67 seconds and 10.36 mph.

Again, advantage: SRT. But not for long.

The Viper stops from 60 mph in a respectable 110 ft, but the C7 Stingray shines with an unbelievable 99 ft.

Even though the C7’s tires are not nearly as wide as those on the Viper, the Stingray still manages to outperform the snake from SRT, posting 1.05g to the Viper’s 1.01.

And for the final blow: the C7 Stingray took the slalom by storm in 73.5 mph to the Viper’s 72.0. As we experienced during our test drive of the 2014 Stingray, the car is so well-balanced, well-behaved, talkative, and informative, that Edmunds even said that running the slalom was “a breeze” compared to the Viper, which was more of a point and “hope the grip is there” experience.

Determining the winner between these two is somewhat akin to choosing a flavor of ice cream. Both will bring a smile to the face of the driver, and both are very capable performers. The Viper definitely has the straight line advantage, but the Corvette Stingray is simply a better all-around sports car.

And for those who place greater priority on driving extremely fast in a straight line, the more powerful C7 Z07 is on its way. Something tells us that the Viper won’t remain victorious against that beast.