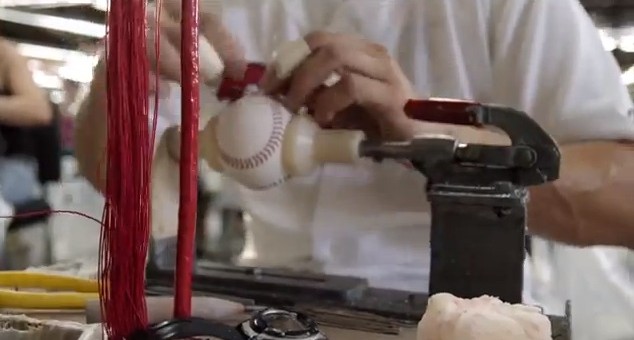 Just like Chevy’s MLB-focused The Groundskeeper and The Bat spots, this Chevrolet clip — entitled The Baseball — equates the 2014 Impala to being a testament to craft in all forms… in this case, the (Rawlings) baseball. The video outlines the life of an MLB baseball which, as it turns out, has a very brief lifespan that averages a mere six pitches.

Each ball starts out with a rubberized core, flawlessly tanned leather, and waxed thread that’s hand-sewn using two needles. In fact, the person in charge of sewing the ball has to hit the mark 108 times, every time, demonstrating that creating a baseball is still a matter of expert craftsmanship. So, here’s the very well-told story of what’s at the heart of every game — the baseball:

Here’s to dual cockpits and well-design control panels, to tailor-made presets and customizable interfaces. This is the all-new 2014 Chevrolet Impala — a testament to craft in all forms.

This is the story of a baseball, and its very brief but bright lifespan. But despite its future, nothing is overlooked, or above scrutiny, including the man armed with two needles drawing waxed thread through flawlessly tanned leather. He has to hit the mark 108 times, every time. Without this precision, there would be no shoulders to ice, no splinters, to strikes. Here, three times of polyblend wool wrap around a rubberized core — all, so in the end, a ball might make it through six pitches. But that’s six chances at greatness, before it finds the stands or hits the ground. Six pitches, before its perfection is ruined. And it all starts over again.

Another awesome spot by Chevy. And with over 130,000 views on YouTube, it doesn’t take a marketing genius to tell that the video has generated at least a decent amount of interest. That said, Chevy’s goal here seems to revolve around recreating the public perception for the new Impala by equating it to the MLB baseball — a product that’s of a high quality and one that is hand-crafted, while speaking to a specific (baseball-loving) audience. Seems like a good strategy to us.