General Motors and Honda have announced having reached an agreement to co-develop next-generation fuel cell system and hydrogen storage technologies, with the objective of bringing commercially-feasible solutions to market by the 2020 timeframe. The partnership’s expects to succeed by “sharing expertise, economies of scale, and common sourcing strategies”, according to General Motors.

The two automakers will join forces in working with stakeholders to “further advance refueling infrastructure, which is critical for the long-term viability and consumer acceptance of fuel cell vehicles.” The partnership seems to be a good fit given that both automakers are leaders in the space, with the Clean Energy Patent Growth Index ranking GM and Honda in first and second place, respectively, in total fuel cell patents filed between the years 2002 and 2012, with over 1,200 between the two.

General Motors launched its Project Driveway program in 2007. The initiative involves a fleet of 119 hydrogen-powered first-generation Chevrolet Equinox crossovers, which have cumulatively amassed nearly 3 million miles of real-world driving — more than any other automaker, according to GM.

GM said that it will announce its fuel cell production plans at a later date. 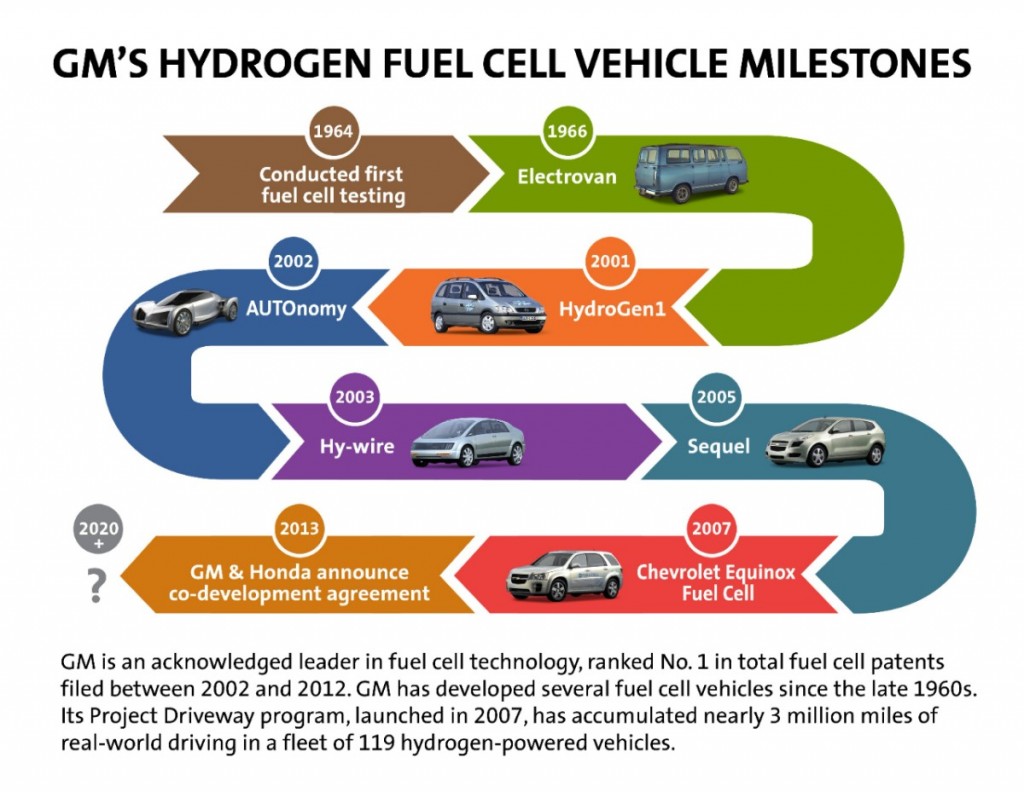 Honda, meanwhile, began leasing the FCX hydrogen car in 2002, deploying 85 units to customers in the U.S. and Japan,. The successor to the FCX, the FCX Clarity, is included in those 85 units. The automaker has been collecting valuable data regarding real-world use of fuel cell EVs.

As part of today’s announcement, Honda has shared plans to launch the successor of FCX Clarity in Japan and the United States in 2015, and subsequently in Europe.

Fuel cell technology is widely seen as being able to overcome many of the major challenges facing automotive transportation today, including petroleum dependency, emissions, efficiency, range and refueling times. Fuel cell vehicles are capable of operating on renewable hydrogen made from sources like wind and biomass, with the only emission being water vapor.

What’s more, fuel cell vehicles are capable of having up to 400 miles of driving range, and can then be refueled in as little as three minutes. The propulsion technology is capable of being used on small, medium, and large vehicles.