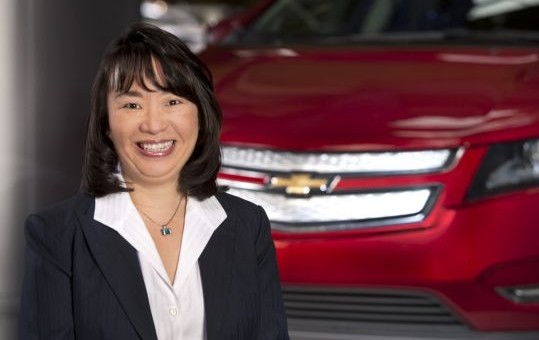 Back in February, General Motors announced plains to integrate 4G LTE technology into every vehicle it builds by 2015. The initiative, which will commence in the United States (through AT&T) and Canada as soon as 2014, and make its way to overseas brands and markets, including Opel and Vauxhall in Europe shortly after, will allow GM to deliver a wide array of possible new in-vehicle functionality that is unrivaled in its convenience and proliferation. In charge of GM’s 4G connectivity efforts is Mary Chan, serving in a newly-created position of President, Global Connected Consumer.

Ms. Chan, who recently joined GM from Dell, Inc., is a quintessential example of the culture shift of the New GM compared to the Old GM, which has been described as having an “insular” culture which rarely (if ever) hired outside the automotive industry and even its own corporate ranks, instead electing to promote from within for any new projects. Outside of heading GM’s 4G LTE initiative, Ms. Chan will also be responsible for GM’s OnStar telematics arm as well as the recently-created global Infotainment Business Unit. The seasoned technology hire will report to GM Vice Chairman Stephen Girsky.

At Dell, Ms. Chan served as the senior vice president and general manager of Enterprise Mobility Solutions & Services since 2009. Before joining Dell, she held various senior executive-level positions at Alcatel-Lucent and Lucent Technologies Inc., most notably as president of 4G/LTE Wireless Networks and president of Global Wireless Networks. She also served at AT&T Network Systems earlier in her career. With such a resume in telecommunications and both consumer electronics and enterprise solutions, one could very well say that Ms. Chan is well-suited to lead the planning, setup, and execution of GM’s strategic global infotainment programs. And having the approval of GM executives can’t hurt either, as Ms. Chan stated that one of the best things about her new position is the support from the top ranks at GM. In fact, chairman and chief executive officer Dan Akerson, himself a former telecom executive, is one such advocate. “It’s nice to have the support of the chairman,” said Chan.

Support for Ms. Chan and her work at GM isn’t unfounded, as the importance of technology and connectivity is ever-increasing in the automotive industry. Mr. Girsky recently stressed the importance of wireless technology in advancing transportation, saying that “… we’ve only scratched the surface of what is possible when the automotive and wireless worlds converge”, and adding that, “GM intends to lead this next wave of innovation.”

In Some Respects, GM Already A Technology Leader

GM’s intent to lead the infotainment and connectivity space isn’t all talk, either, as the automaker has quickly gone from laggard to innovator in the space in just a few short years. In 2009, for instance, radios and navigation systems in GM vehicles sported lackluster software resulting in an experience that wasn’t particularly user-friendly or attractive. Today, vehicles from each GM brand, including Chevrolet/Holden, Cadillac, and the Buick/Opel/Vauxhall tri-fecta, sport intuitive and user-friendly infotainment systems, some of which even support multi-touch gestures (Cadillac CUE).

Adding more support for GM’s developing leadership in the infotainment space is the fact that the automaker was among the first in the industry to add smartphone-based navigation functionality to its vehicles, which can be used on several new Chevy (or Holden) models (including the Sonic RS and Spark) when coupled with the Chevrolet MyLink infotainment system. The solution saves the user the cost of a built-in navigation system, which can sometimes exceed a thousands dollars, while delivering what is arguably a better experience thanks to the smartphone’s ability to update its maps on the fly, compared to traditional SD card- and DVD-based navigation solutions.

In addition, GM vehicles will soon be able to offer tight integration with Apple iOS devices like iPhones, iPads, and iPod Touches, while the initiative to integrate 4G LTE connectivity into its vehicles is the most comprehensive approach in the automotive industry to date in “connecting” the vehicle.

At first, GM’s integration of 4G LTE will likely enable solutions such as mobile (“rolling”) Wi-Fi hotspots, increased infotainment options, and more advanced OnStar service solutions. But the real promise of integrating a high-speed cellular network into a vehicle lies in the possibilities that exist in the long-run (that haven’t even been developed yet) , including car-specific apps, which are already in development by GM and should be available in some models at the end of the year.

King Of The Telematics Hill

On the telematics side, GM was the first automaker to successfully build out and integrate a subscription-based telematics service with OnStar roughly a decade ago — thereby establishing a clear leadership that the automaker enjoys to this day. In 2010, OnStar solidified its leadership position by being the first to release a mobile app called MyLink (now RemoteLink) that allows users to carry out vehicle functions (such as remote start, locking/unlocking doors, etc.) and check vehicle status (such as gasoline/electric range, oil life information, etc.), directly from their smartphone, without the need to be in proximity of the vehicle.

In 2011, RemoteLink functionality was expanded to contain a navigation feature that allows users to send a destination directly from the smartphone directly to an OnStar-equipped vehicle. And in 2012, RemoteLink was further expanded with FamilyLink — a suite of safety-oriented services for the family.

The proliferation of a cellular signal in GM vehicles, as well as the the ensuing functionality and innovation that it delivers, will only accelerate from this point forward. And having one person directly responsible for infotainment, connectivity, and OnStar (which itself exists at the intersection of those two disciplines) should be good for General Motors, its brands, its vehicles, and its customers in the short- and long-term.

Here’s to the next decade of connectivity, infotainment, and telematics innovation from The General!