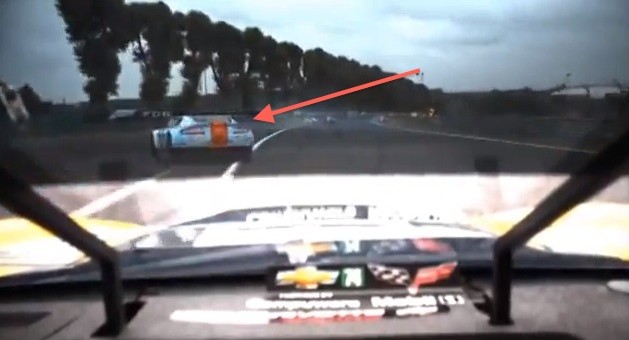 During the first ten minutes of the 81st 24 Hours of Le Mans today, the No. 95 Aston Martin Vantage GTE driven by Danish driver Allan Simonsen exited the track at high speed at the Tertre Rouge corner and collided with the race barrier, seriously injuring the 34-year-old driver. In serious condition, Simonsen was attended to by doctors and immediately transferred to the track’s medical center, where he died.

The incident took place on Simonsen’s fourth lap of the race. It was his seventh time participating in the 24 Hours of Le Mans.

What caused Simonsen to go off the track is unclear at this point, but initial reports state that Simonsen was conscious upon being extracted from the vehicle. An onboard camera in the two cars following Simonsen at the time of the crash, the No. 74 and 73 Corvette C6.Rs, captured the incident. The footage doesn’t appear to show any contact from another vehicle. Allan Simonsen. Photo courtesy of the 24 Hour of Le Mans.

The video below shows the beginning of a crash that eventually claims the life of a driver.

It has been 16 years since the last fatality at Le Mans. The one preceding that of Simonsen today was that of Sébastien Enjolras, who was killed in practice for the 1997 race in his Peugeot.

The 24 Hours of Le Mans has issued an official statement:

The driver was immediately attended on the scene by the doctors from the Automobile Club de l’Ouest’s Medical Service.

In a serious condition, Allan Simonsen was transferred immediately to the Circuit Medical Centre where he died soon after due to his injuries.

His team mates in the No.95 car were his fellow countrymen, Christoffer Nygaard and Kristian Poulsen.

The Automobile Club de l’Ouest wishes to express its great sadness following this incident, and extends its deepest condolences to the family and those close to Allan Simonsen.

The Automobile Club de l’Ouest will make no further statement while the exact reasons for the accident are still being wholly determined.

Aston Martin has replaced the contents of its website with the following statement:

Le Mans, 22 June 2013: It is with great shock and sadness that the Aston Martin Racing Team confirms that an accident occurred shortly after the start of the 24 Hours of Le Mans at around 15:09 hrs CET today (22 June) when the No 95 Vantage GTE driven by Allan Simonsen left the track at Tertre Rouge.

Tragically, and despite the best efforts of the emergency services in attendance, Allan’s injuries proved fatal.

Aston Martin Racing Managing Director, John Gaw, said: “On behalf of all of us at Aston Martin Racing, I would like to extend our deepest sympathies and condolences to the individuals, and families whose friends or loved ones were involved in today’s terrible tragedy.”

Aston Martin Racing will not make any further comment until the precise circumstances of the accident have been determined. Next of kin have been informed.

Following the ACO’s media statement concerning the tragic death of Aston Martin Racing driver Allan Simonsen, and at the specific request of his family, the team will continue to participate in the 24 Hours of Le Mans in tribute to Allan.

Our condolences go out to Mr. Simonsen’s family and friends.

We’ll update this page as we learn more.