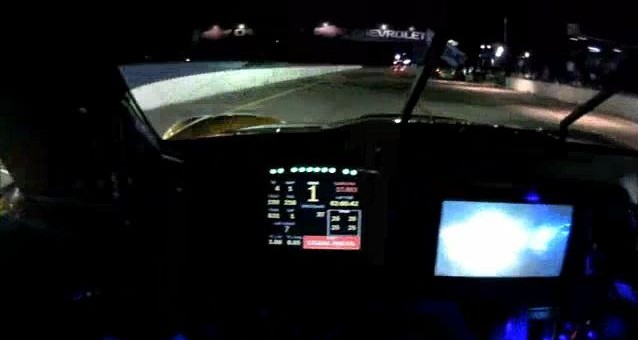 With 6.5 hours left in the 24 Hours of Le Mans at the time of this writing, Corvette Racing is currently running sixth and seventh, with the No. 74 and 73 cars, respectively. Corvette Racing has so far seen its minimal share of incident on Circuit de La Sarthe, the track of the 81st 24 Hours of Le Mans, but still can’t seem to catch the likes of Porsche, Aston Martin and Ferrari, as the C6.R isn’t nearly as fresh as the rest of the field. Still, the team remains ahead of crosstown rival SRT and their Vipers.

Oliver Gavin suffered a spin-out during the earlier hours due to rain, but avoided contact with another car, or the side wall. Indeed, the weather has played a huge factor in this year’s Le Mans, with conditions changing from dry, to wet, to windy — all before nightfall. So far, there’s been a record nine yellow flags during this year’s race. Corvette Racing also faces the adversity of using FIA GTE class tires for the first time. The race is also the 100th time Corvette Racing has used Michelin tires.

“Those were pretty small problems that haven’t hurt us too much. We have a great crew and they turned it around quickly. We highlighted the problem with what felt like a fuel pressure issue, and they got that fixed really quickly. We also had a rear tire issue, which happens at Le Mans. There is a lot of debris. Our plan is to keep going around. We will see where that takes us.”

Despite the excitement, the entire race has been soiled by tragedy with the death of Danish Aston Martin driver Allan Simonsen in the opening laps of the race.