During the annual Worldwide Developers Conference (WWDC) today, Apple announced an extension of its iOS mobile operating system for cars. Dubbed iOS in the Car, the feature integrates devices running iOS, such as an iPhone, iPod Touch, or iPad, with a vehicle’s built-in infotainment system. And as partially anticipated, two of General Motors’ brands — Opel and Chevrolet — were listed as brands that will integrate iOS in the Car in 2014.

According to Apple, having iOS in the Car built into the vehicle will allow users to connect their iPhone 5 and interact with it using the car’s built-in infotainment display and controls or Siri Eyes Free. To note, General Motors was the first automaker in the industry to integrate Siri Eyes Free in the Chevrolet Spark and Sonic.

iOS in the Car allows users to safely make phone calls, access music, send and receive messages, get directions, and more. Apple lists the following specific iOS in the Car use cases as examples:

Commute Summary
iOS in the Car knows when the user is leaving home for work — or vice versa — and displays traffic conditions and the ETA.

Navigate with Maps
Users can get turn-by-turn directions with Maps. The user has the choice of entering an address or letting iOS in the Car select any address the user received in an email or text.

Receive and Send Messages
Text messages appear right on the car’s display. Siri can read them out loud over the car’s speakers and users can reply by dictating to Siri.

We find it peculiar that Apple only displayed the Chevrolet and Opel logos as the only GM brands with plans to integrate iOS in the Car for 2014. For starters, if Opel is compatible, then so are GMC and Vauxhall — thanks to the common IntelliLink Infotainment System; and by association, if GMC is compatible, then so is Buick. And what of Cadillac and its CUE infotainment system? 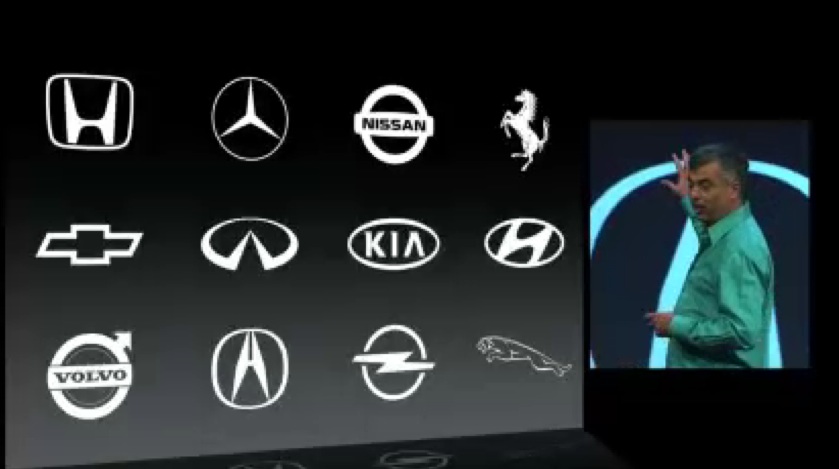 We’ve reached out to General Motors for a clarification about its vehicle brands that will be compatible with iOS in the Car, and will update this article as soon as we hear back. However, something tells us that Apple simply ran out of room in its presentation to show more than the twelve logos of automotive brands. These included:

Notably, Apple is currently using the MyLink infotainment system from the Chevrolet Spark and Sonic to showcase screenshots of iOS in the Car in action.