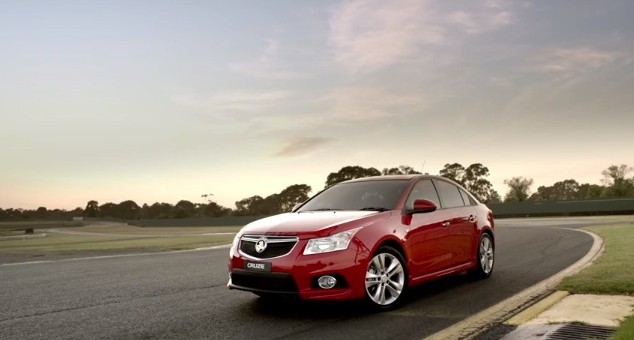 Yesterday, we showed you Holden’s launch commercial for the new VF Commodore. Today, we have this ad introducing Holden’s new Think Holden slogan.

Similar to the commercials for the Holden Colorado and Colorado 7, the ad starts out by asking the viewer to “think about this”:

“There are more than 60 car brands in Australia today. Only one of them was born here”, as Holden’s Lion logo comes into full prominence.

“The average Australian spends A$80 for a full tank of petrol. A full charge for the Holden Volt costs as little as A$2.50”, the ad continues.

“When your new VF Commodore rolls off the assembly line, it’s done zero kilometers. When ours rolled off the test track, it had over 3.3 million.”

“Think about this”, the ad asks again.

“It’s amazing what you do when you put your mind to something, so imagine what we can do we put 1,000 engineers’ minds to something”, alluding to the Chevrolet/Holden Volt. “You can drive this car for months without visiting one of these”, the narrator states as the shot pans to a gas station. “In fact, it [the Volt] fills itself up in the middle of the night while you’re sleeping.”

The ad then switches attention to the Chevrolet/Holden Cruze, and states: “This is the only small car proudly made right here in Australia, and we also make it exciting.” Then it’s the VF Commodore’s turn to shine: “A true Australian icon is now truly world-class, with the VF Commodore exported to the USA as a top-of-the-range Chevrolet sedan”, referring to the Chevy SS.

“Think about this”, the ad asks one final time.

“A car that puts a million songs at your fingertips”, referring to the Holden Barina (Chevy Sonic/Aveo). “A car that can park hands-free”, showing the new Commodore. “A car sold in over 60 markets around the globe is designed by an Australia from St. Kilda”, referring to the Barina again. “And an electric car that’s built to drive across the country with more road per person than any other place on earth”, referring to the Volt again.