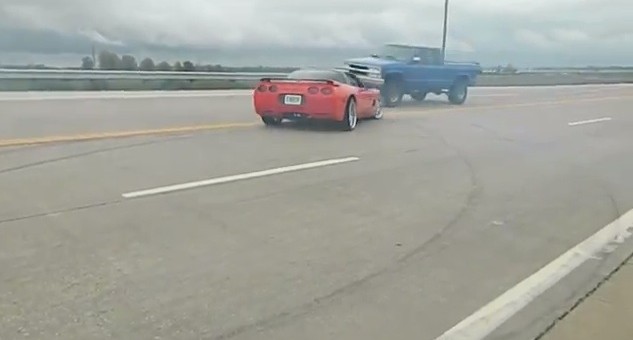 Somewhere in Florida (we think), the owner of a red fifth-generation Corvette tuned by Craven Performance is probably sitting and biting his nails, because he was the leading offender of a hit-and-run. To recap, the Vette driver, wearing a rather extravagant Corvette jacket, turns on the ghetto-rap (with the windows down, of course) and proceeds to pull out of (what seems to be) a car meet. First, he burns out and does a half-donut onto an active and rather narrow public road. Mistake #1. Then, he does another half-donut onto oncoming traffic, nearly colliding with a row of cars and the cameraman. Mistake #2. And if two uncontrolled 180s wasn’t enough, the driver attempts to save face by speeding away, only to skim the side of an oncoming Silverado and — rather than stopping and reconciling the damage — speed away.

The driver just couldn’t handle the power of his Vette. For instance, it doesn’t look like he even meant to do the first half-donut; instead, the goal was probably a powersliding exit. But hey, at least he turned the windshield wipers on (some major karate going on there). Then, instead of stopping and going home with his tail between his legs, the driver proceeds to do the second 180 — during which he was obviously not in control. And then comes the hit-and-run part, as a commentator declares, “That’s a hit and run, baby”. Priceless.

In any event, don’t hoon on the street… especially a busy street, and especially if you can’t handle the power. Also, eardrum-blasting rap and hefty Vette jacket usually don’t help. And to top it all off, the red calipers aren’t BBKs — they appear to be fake caliper covers.

This video should make some nice evidence for the cops. Let’s hope the driver hasn’t trimmed his nails in a while… because he’ll be biting on them for a long time.