I’m a tall guy, 6’3″ to be exact. When you’re tall, finding things that fit is a challenge, from pants to cars. I happen to have landed on two crosstown rivals — the 2013 Equinox and 2013 Edge for the very reason that I seemed to fit well into both, besides the fact that I was drawn to the styling of both crossovers. Both of these are more alike than they’re different: both are on the smaller side of midsize, and both are offered with similar features and options.

Having picked out the vehicles, the next decision was to select either the four- or the six-cylinder engines. Admittedly, I’ve been driving a ’96 Integra for the greater part of the last decade… and the car was good for roughly three horsepower. So I took preference in the V6, partly because I despised getting owned by Grandma in her station wagon at every light.

Some other items of consideration included a good infotainment system with a decently-sized touch screen and Bluetooth audio streaming along with a backup camera. Living in Colorado, I wanted AWD, along with an automatic gearbox that I could throw into “manual” mode whenever I felt compelled to have more control of the car’s shifting. I also needed the back seat to not suck, while still having ample amounts of cargo room.

While those were my main requirements, I did find a few more items that led me to make up my mind about the CUV I wanted to ultimately buy after spending some time with each. To that end, I took each car for an overnight test drive. Each cradled a V6 with AWD and each was equipped with the model’s flagship infotainment system.

Let’s start with the engine. The 2013 Equinox’s 3.6L V6 LFX is rated at 301 HP and 272 lb.-ft. of torque compared to the 2013 Edge’s 3.5L V6 Duratec and its 285 HP and 253 lb.-ft. of torque. Both are great numbers for a V6… on paper. But  on the road, the direct-injected LFX felt like a completely different powerplant. In fact, the V6 LFX-powered 2013 Equinox felt so much quicker, so much more responsive, so much more fun, that after driving the 2013 Edge V6, I had to check the window sticker to make sure that I didn’t get a four-pot by mistake. The Chevy’s V6 had a smoother power band, left the line in a hurry, and the gearbox shifted exactly when it was supposed to. The Ford’s V6, on the other hand, felt like it was forced (rather than wanting) to leave the line, needed to down-shift early and often to really get moving, and wound up like a 4 cylinder when I really got on the throttle. In other words, both engines’ specifications simply don’t tell the whole story , and you really owe it to yourself to drive each to notice the (subjective) difference.

It’s not that I don’t like Chevy’s MyLink system in the 2013 Equinox… I actually do. But the MyFord Touch setup in the Edge has MyLink beat in almost every way, in my experience. Take, for starters, the Edge’s backup camera that features a superimposed computer-generated runway guide and audible proximity alerts. The backup camera on the Equinox was basically the same, although it didn’t have the guide or the proximity sensors (available on the LTZ).

Both systems are touchscreen-based, but the screen in the Edge seemed to be placed in a more ergonomic position. Meanwhile, the screen in the Equinox is located higher on the dash, necessitating the driver to reach farther to touch it. Ford placed the MyFord Touch screen lower by comparison, allowing for less reaching.

All that is to say that in the Equinox, I felt fatigue in my arm by scanning radio stations (this might have had something to do with my tall stature). But that’s what the buttons on the steering wheel are for… right? Nope, the steering wheel controls lack the ability to scan. The Edge, meanwhile, allows the driver to pretty much control all infotainment functions from the steering wheel (and then some), although button placement was a little awkward. To note, the steering wheel buttons in the Equinox are more ergonomically placed than those in the Ford, but they don’t do nearly as much. This, however, will be something that will be addressed once MyLink 2.0 makes its way over to the Equinox.

Rear seat space seems to be all the rage with CUVs these days: how many do you get, what can they can do, how can they fold, and how many levers they have. For me, the 2013 Equinox tops the 2013 Edge in this department, although it’s a close call.

The second row seats in the 2013 Ford Edge recline (significantly and comfortably), while having the ability to be folded with the press of a button located in the cargo area (trunk). Meanwhile, the rear seats in the 2013 Chevy Equinox fold, but do so manually, and their ability to recline is minuscule — at best.

The real kicker in the Chevy, though, is the Multi-Flex system, which allows the seats to slide fore and aft eight inches — a nice feature, especially for families with kids: you can always squeeze them just a little more to fit that third beer-filled cooler in the back.

This one is simple: the 2013 Equinox feels studier, smoother, and more in control than the 2013 Edge. This is most likely thanks to the FE2 suspension with Dual Flow Dampers and hydraulic steering that’s part of the the V6-powered Equinox line. The 2013 Edge, on the other hand, had some noticable CUV sway and wobble when cornering, and the suspension was nothing to brag about. The Edge’s rapidly aging Mazda-derived platform probably didn’t do the Ford any favors, either.

The driver’s seat in the 2013 Equinox felt more comfortable than that in the 2013 Edge, with the one thing making me particularly content being the ample amount of knee room. You see, my right knee tends to lean up against some part of the center console in nearly every car I drive. The situation isn’t a choice or a benefit, but rather a problem, since adjusting the right leg isn’t really an option when driving (except for the rare instance of the car being on cruise control). The Edge wasn’t particularly uncomfortable, but my knee did have to rest on the outer edge of the center console, which eventually got annoying. This wasn’t the case in the Equinox, as my right knee didn’t even touch the center console. I’m not sure whether this was due to my height, the design of the seat, or that of the console… but my knee was happy and free.

Taking into account the options I needed (wanted?), the Equinox was less expensive than a comparable Ford Edge. So while the Ford, was more expensive (by about $3,000), it also has a higher residual value, resulting in roughly the same lease payment (of about $350/month). It was nice to know my decision didn’t have to come down to the monthly payment amount.

Having driven both the Edge and the Equinox and spending a sleepless night lamenting my decision, I ended up buying the 2013 Chevy Equinox 1LT in Tungsten Metallic.

I think both CUVs are great cars and you won’t go wrong with either of them, but the 2013 Equinox came out ahead in my opinion. I wanted to drive the Chevy, I liked driving the Chevy, I found myself excited to bring the Ford back to the dealer so I could buy the Chevy, and then drive it some more. It has now been a week, and so far, I’ve absolutely no buyers’ remorse. The Chevy’s 3.6L LFX continues to impress me and I thoroughly enjoy the driving experience. Grandma and her station wagon are now just a distant memory in my rear view mirror. 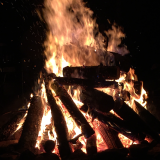 Andrew is the Technology Officer for GM Authority. He rarely writes articles, unless they involve some kind of PHP code, SQL code, or some sort of scripting language. He's now the proud owner of a 2013 Chevy Equinox.