Wednesday May 8, 2013 marked the official opening of General Motors’ new manufacturing plant in Bekasi, Indonesia as the first Chevrolet Spin rolled off the production line. The new 58,000 square meter (624,000 square-foot) plant is located 16 km (10 miles) east of Indonesia’s capital Jakarta and is fully-owned by General Motors Indonesia. The facility will staff 700 employees and is the result of a $150 million investment by The General.

Bekasi will be one of two GM manufacturing facilities worldwide (the other being in Brazil) to produce the three-row Chevy Spin subcompact MPV, which will replace the Chevrolet Meriva and Zafira — both rebadged last-gen Opel vehicles — in developing markets around the world. Spin is based on GM’s global Gamma vehicle architecture shared with the Agile, Onix, Montana, Prisma, Aveo/Sonic, and Trax, among others, and will compete with the Toyota Avanza in Southeast Asia.

Bekasi has an annual production capacity of 40,000 vehicles, and eighty percent of the Spins produced at the facility will be sold in Indonesia — one of the fastest-growing markets according to GM.

“Indonesia is one of General Motors’ fastest growing markets and we are big believers in build where we sell and source where we build,” said Tim Lee, GM vice president, Global Manufacturing and president, International Operations. “Last year, we saw a 17 percent growth in Indonesia compared with 2011. With the excitement around the launch of Chevrolet Spin, we are looking forward to continuing on this path of success.”

The remaining 20 percent of Spins made in Indonesia will be exported to Thailand and the Philippines.

Celebrating the grand opening, the plant’s employees stamped their hand in clay, and the resulting tiles will be installed on a permanent wall in the facility to commemorate the launch. Other special activities included snare drum performances, flag dance, ribbon cutting and the music of a marching band. Once the formal speeches were completed, guests were taken on a tour of the production line.

General Motors was the first car manufacturer in Indonesia with the establishment of GM Java in 1927. Besides the new Spin, Chevrolet offers the Spark, (new) Aveo, Orlando, Trailblazer, Captiva, and Colorado in the country, which are sold and serviced through 34 dealers. 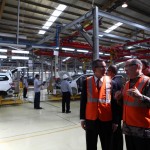 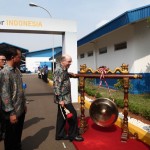 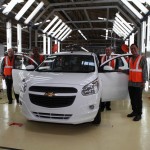