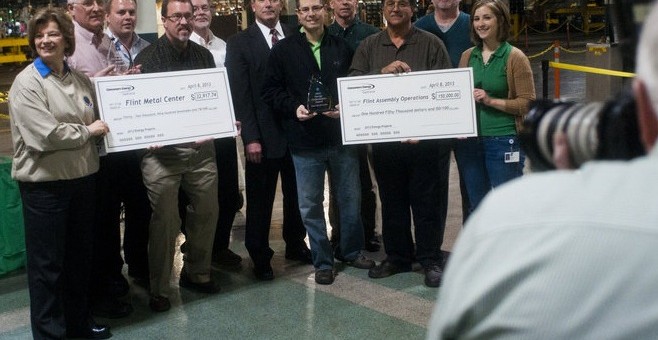 Two General Motors plants — Flint Assembly and Flint Metal Center — were issued rebates totaling $183,000 from Consumer Energy, a Michigan utility providing electric and natural gas service, for their energy saving efforts in 2012. The two facilities successfully completed projects to reduce their energy utilization by various methods, ranging from the installation of more efficient lighting to the elimination of steam heat. Combined, the changes should save the plants over $926,000 every year.

According to senior vice president of distributions and operations for Consumer Energy Dan Malon, the two plants will save roughly 57 million kilowatt hours per year and nearly 40,000 MCF (million cubic feet) of gas.

“In effect, that’s 8,100 tons of carbon monoxide that will not be put into the environment and it will offset almost 13,000 trees that would have to be planted”, he said.

In 2012, Flint Assembly, the Flint Metal Center, as well as Flint Engine Operations were among 54 GM facilities to meet a voluntary energy-reduction challenge set out by the U.S. Environmental Protection Agency, decreasing energy consumption to meet the EPA’s Energy Star Challenge for Industry. Equally impressive is that the Flint facilities are among the oldest in GM’s stable of plants, yet are still serving as leaders in energy conservation. Besides the $183,000 in rebates, the two facilities were recipients of GM’s North American 2012 Energy Award.

“The GM Flint team recognizes the importance of being environmental stewards and we are willing to share our learnings and experiences with individuals and groups trying to reduce their carbon footprint,” said Amy Farmer, director of the complex that includes the assembly and stamping plants.

The plants’ improvements in efficiency don’t disappoint when it comes to fiscal reality, since the decreases in energy intensity result in sizable operational savings that have an effect on the bottom line. Flint Assembly will save $620,000 a year from lighting and steam room changes, earning the maximum $150,000 rebate check from Consumer Energy. These and other energy projects, have reduced the plant’s cost to assemble a truck by $55 per vehicle. Meanwhile, Flint Metal Center will save $306,000 a year after installing more efficient lighting and eliminating steam heat; the plant will earn a $33,000 rebate check from Consumer Energy while reducing the cost to ship a ton of metal by $35.

In other words, the improved overall efficiency will result in monetary and carbon footprint savings.

“You’re using fewer emissions when you utilize electricity and natural gas and other utilities from year to year. It’s a win-win when you look at the cost savings and the environmental aspects.”

This is, indeed, a win-win for General Motors, the people of planet Earth, consumers, and plant workers alike. In fact, few will be able to argue about decreasing energy expenditures and thereby reducing energy utilization and pollution. So in this instance, along with others seen at General Motors, greener is not only better for the environment, but it is more profitable, as well.

Broadening our scope just a tad, it is encouraging to hear the following from Mr. Malone of Consumer Energy: other organizations, both large and small, can implement measures like these to become better corporate citizens and more environmentally friendly. Any takers?