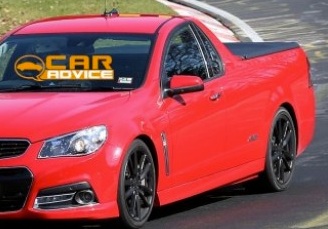 Australia’s CarAdvice caught a completely undisguised Holden VF Commodore SSV ute lapping the famed Nurburgring track in Germany. Sporting a Victorian plate on its tailgate, the Zeta-based car-with-a-bed was undergoing the final round of dynamics testing, and its sighting immediately sparked chatter of the possibility of the freshened Commodore making its way to Europe.

Holden confirmed that a Holden engineer with official Nurburgring driving certification was indeed driving the SS V ute on track, but advised not to read too much into the car’s presence in Europe as a sign of possible export plans to the region.

“Holden tests its new vehicles all over the world, often in conjunction with the global GM engineering community”, said Holden communication director Craig Cheetham. “This week, there are a number of industry pool days where various manufacturers do track-based testing, and our engineers are involved in some final dynamic testing of VF.”

Continuing to consist of the sedan, Sportwagon and the ute body styles, the VF SSV trim level will continue to use the same 6.0 liter V8 engine seen on the VE. By contrast, the otherwise identical (but left-hand-drive) Chevy SS performance sedan will make use of GM’s 6.2 liter V8 (LS3).

In addition, the the entire VF range will utilize aluminum hoods to decrease weight and increase fuel economy, but only the sedan will have an aluminum trunk lid. What’s more, all VF models will utilize an electro-mechanical power steering setup, switching away from the hydraulic mechanical system. The changeover will reportedly conserve 0.1L/100km (or 0.23 MPG).

Holden will officially launch its VF Commodore in June. In sedan form only, the VF will be exported in limited quantities to North America as the Chevy SS. As of this writing, GM-Holden has no plans to export the updated Commodore to Germany, but may (or may not) sell the vehicle in limited numbers in the United Kingdom as a Vauxhall.