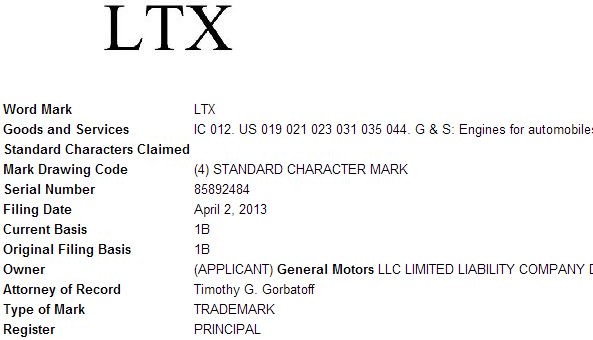 Historically, the General Motors “LT” small-block V8 engine family featured multiple variants. There was the base 5.7L LT1 V8 engine, used in several GM vehicles in the early 90s, the most familiar being the C4 Corvette, F-Body Chevrolet Camaro SS and Pontiac Trans Am. There was also the LT4, a high-performance version of the LT1, which was found in C4 Corvette Grand Sports, SLP Pontiac Firehawks, and SLP Camaro SS models. But for the C4 Corvette ZR1, there was the special LT5 — an engine developed by Lotus, with a DOHC design, and four valves per cylinder.

As GM seems to be looking to repeat history with the all-new fifth-generation Small Block 6.2 LT1 destined for the 2014 Corvette Stingray, as we’ve discovered that the LT engine family will expand with familiar names. Most recently we’ve uncovered that General Motors has reapplied for the “LT5” trademark, described as “engines for automobiles, sport utility vehicles, trucks and vans.” As such, we’re lead to believe that a new LT5 would find itself in a new high-performance variant of the C7 Corvette, given the history.

The same goes for the “LTX” trademark filing. While some may point out that “LTX” could simply be the umbrella name for the entire LT-engine family (LTx, with x being whatever designation the LT engine is given), we like to think “LTX” could be the name of some range-topping motor in the works, as X is so-often tied to something extreme. Perhaps a crate motor, like the current LSX engine.

While we’re on the subject, a very revealing Corvette Forum thread also mentioned the return of the LT4 engine, which is expected to be placed in a high-performance variant of the next-generation Chevrolet Camaro that will begin rolling out in 2015. There’s also the refiling of the “L88” trademark, which was the name given to a select amount of 7.0L Corvette racing engines from the 1960s.

So, with the new LT1 and the Corvette Stingray due to arrive shortly, keep an eye out for LT4, LT5, LTX and L88 engines, and get ready for a new generation of GM performance.