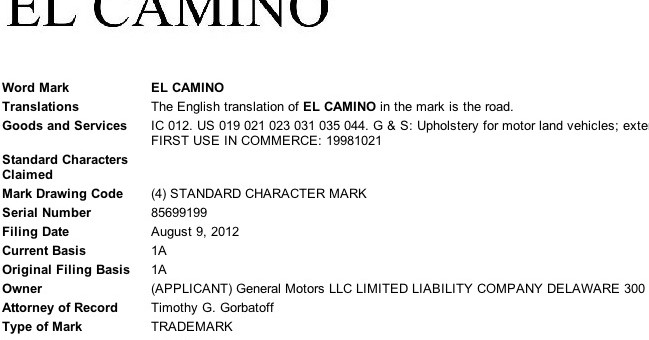 General Motors is once again actively pursuing the trademark for “El Camino”, GM Authority has learned.

On April 11, 2013, the automaker sent correspondence to the United States Patent and Trademark Office (USPTO) for the application carrying serial number 85699199 that was originally filed on August 9, 2012 for goods and services such as “upholstery for motor land vehicles” and “exterior and interior badges for motor land vehicles”.

GM’s new correspondence to the USPTO follows communication by the office (known as non-final action) to The General on October 15, 2012 that had some believing that the automaker will no longer pursue the trademark.

In trademark parlance, a non-final office action is a request asked of the patent applicant by a USPTO examiner. Upon providing its reply, the applicant can request reconsideration or further examination, with or without making an amendment to the original application.

In other words, the USPTO had a question about GM’s application in October of last year, and The General has provided an official reply to the Office in April. The next step usually involves the USPTO publishing the application for opposition, which allows any party who believes it may be damaged by the registration of the mark thirty days (from the publication date) to file either an opposition to registration or a request to extend the time to oppose. Following the thirty-day opposition period, the application becomes closer to being approved and its ownership granted to the applicant.

As we have already mentioned in our past coverage of GM’s trademark activity, organizations no longer seek to secure trademarks just for the sake of doing so. This is largely due to the USPTO requiring a legal document from the applicant called a Statement of Use (SOU), wherein the applicant must explain its plans to use the trademark in a real-world product or service (read: not vaporware).

As such, there is a very good likelihood that — given the successful registration of the “El Camino” trademark — General Motors will introduce a vehicle by the same name. The El Camino name will be right on a Chevy-badged Holden (Commodore) Ute, in our opinion. The updated Holden VF Commodore sedan will be available in the United States as the Chevrolet SS performance sedan, but no plans have been announced to import the Ute variant.

The news comes on the heels of an exclusive GM Authority report bringing to light the fact that General Motors is seeking to secure trademarks for the terms LT5 and LTX in the category of automotive engines.