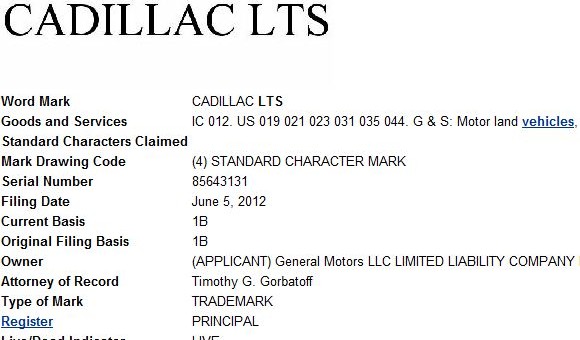 General Motors has become one step closer to registering trademarks for the terms LTS and Cadillac LTS, GM Authority has learned.

The United States Patent and Trademark Office (USPTO) has published the marks for opposition on October 30, 2012 — a time period that allows those parties that believe they may be damaged by the applicant’s registration of the mark to appeal the registration. Both of the applications have survived the 30-day published for opposition date, and as of December 25, 2012, have a status of 688, or Notice of Allowance issued — Statement of Use Required from applicant.

The new status means that General Motors has been allowed to register the trademarks but must first provide the USPTO with a Statement of Use (SOU) — an official statement wherein it promises to use the name in a real-world product or service.

It is widely believed that LTS will be the name of Cadillac‘s upcoming full-size flagship sedan that would compete against the BMW 7 Series, Mercedes-Benz S-Class, Lexus LS, and Audi A8. The vehicle has been rumored to ride on an upcoming full-size rear-wheel-drive vehicle architecture dubbed Omega.

Having passed the public period for opposition, we expect General Motors to file for several extensions in providing the USPTO with its SOU, since the document must contain a product or service that’s on the market today, or being launched in the very immediate future. Since the LTS is years away at the time of this writing (slated for a 2015 or 2016 launch), The General will likely ask for as many as six extensions — the maximum amount officially available from the USPTO; each of the six extensions lasts six months.

Nevertheless, GM’s continuous pursual of the LTS trademarks tells us that the automaker is indeed serious about using the name on an upcoming Cadillac.