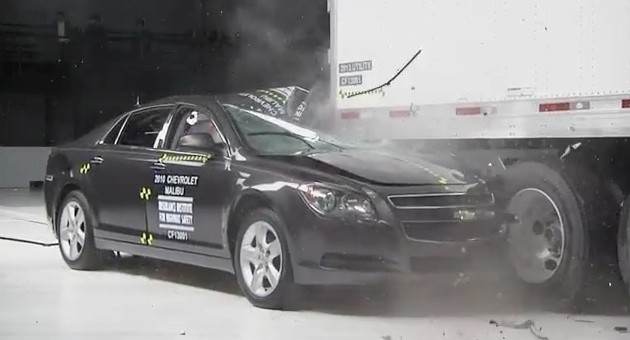 Back in March, the Insurance Institute for Highway Safety (IIHS) released its research on the safety of the underride guards of heavy truck trailers. The results are quite eye-opening and even alarming.

You see, when a car and heavy truck collide, the car is at a serious disadvantage for a number of reasons. One of these reasons involves the general weakness of underride guards on the trailers, which are designed to block cars from driving under the trailers’ rear overhangs.

So the IIHS tested trailers from eight different manufacturers (which together make up over 80 percent of the heavy trailer truck market) by crashing a 2010 Chevy Malibu into their underride guards. Three tests were conducted on each trailer at a speed of 35 mph, including:

What’s most unfortunate in these results is that underride guards are required by federal law in heavy truck trailers to prevent cars from sliding underneath during a rear-end crash, but most guards on the market today (with the exception of the one made by Manac) are minimally designed to meet that standard, and are not strong enough to keep cars sliding under the trailers even in crashes at speeds as low as 35 mph.

Ultimately, the problem is in the strength of the trailers’ guards: crush zones in the front of modern cars are designed to collapse in such a way so as to minimize risk of injury to occupants inside. But it only works in a crash with a trailer if the trailer’s underride guard stays in place when hit by a car. The Manac trailer, which passed all three overlap tests conducted by the IIHS, features a guard with vertical supports that have been moved outboard by the trailer’s engineers — thereby strengthening the ends of the guard.

The weakest trailer in IIHS’ previous tests in 2010 was made by Hyundai; it had the weakest guard and would have killed vehicle occupants that drove into the back of the trailer. Hyundai redesigned its trailer for 2012, and it held up in the full overlap and 50 percent overlap tests, but not in the narrow overlap test.

What’s perhaps even most worrying, however, is that all guards in the test met Canadian safety and crash standards. These standards are stronger than they are in the U.S., so it would seem that tougher safety standards are in order from both the American and Canadian legislation.

In this video, IIHS Chief Research Officer David Zuby explains the performance of most trailers in the study — and we cringe every time a new Malibu hits a trailer’s rear end, becoming totaled in the process. Our only consolation is that these Malibus are dying for the greater good:

Update: a big thanks to reader Rocky for providing the following video of similar underride tests being conducted in Europe. In short, underrun protection systems are necessary, but current EU specifications for them are too lax, as they are in North America: