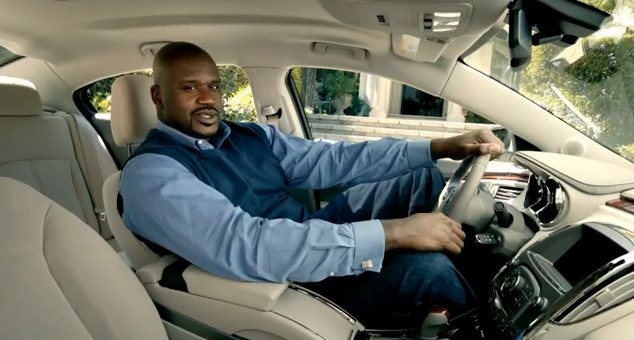 You may have already seen the Buick commercials featuring Shaq and the laCrosse or Peyton Manning and the Verano. The two athletes aren’t Buick’s first official celebrity endorsers since the Tri Shield brand parted ways with Tiger Woods in 2010 (ironically, Woods’ personal vehicle of choice was a Cadillac Escalade, not a Buick). Rather than tying its brand to a single celeb endorser, Buick’s advertising strategy calls for highlighting a variety of vehicle attributes from several well-known personas, each of whom will tell parts of the brand’s story.

Shaq’s spots, for instance, underline the stylish nature of the LaCrosse, and remind viewers that a big sedan doesn’t have to be inefficient. The LaCrosse eAssist is powered by a 2.4 liter mild-hybrid engine that gets 36 MPG on the highway. Buick’s other spots feature Peyton Manning, who demonstrates the infotainment and safety technology in the Buick Verano, and supermodel Marissa Miller accentuating the luxurious and modern styling of the Enclave. All ads call attention to Experience Buick — the brand’s 24-month leasing program that combines the lease payment, scheduled maintenance visits, OnStar, and SiriuxXM satellite radio into a single monthly payment, and each clip concludes with, “If you don’t know the smart and sexy Enclave, then you don’t know Buick.”

The celebrity endorsements are part of Buick’s image-rebuilding strategy and might surprise those who haven’t considered Buick lately (or ever). Unfortunately, plenty of such car buyers still exist in the market. A specific benefit of Buick’s multi-celeb approach is that the brand is not locked into using a single and usually highly-compensated) celebrity spokesperson. The ads also are right in line with Buick’s newfound positioning as an approachable luxury brand. Shaq and Manning, for instance, are significantly more approachable and likable than Woods was.

It seems that Buick’s newfound ad strategy is highly effective, helping the brand post huge increases in leases and in overall sales. We just wish Buick had a real (and we use that term loosely yet purposefully) flagship sedan larger than the LaCrosse… because some have said that Shaq looks rather cramped in the car.

What other celebrities would you like to see Buick use in its spots? Talk to us in the comments.