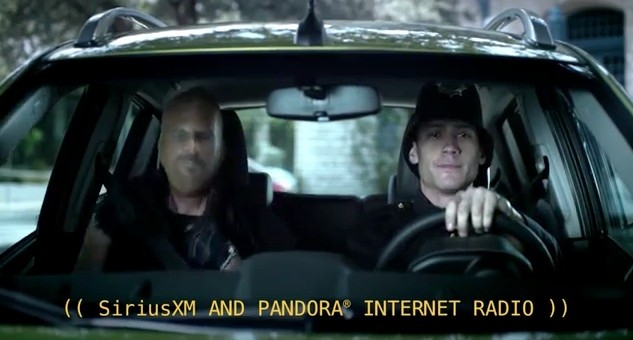 For decades, car drivers and their passengers have debated and possibly even fought over which song, radio station, or CD track to listen to in the car. And given today’s plethora of additional choices, such as Pandora Internet radio, Sirius/XM satellite radio, Bluetooth Audio streams, along with media stored on SD cards and USB devices, it’s that much more difficult to make a selection about what the car’s speakers should actually be playing. Enter the new (and rather comical) commercial about the Chevy Spark.

The gist is simple: a (British) cop and a pantyhose-to-disguise-the-face-wearing robber are in a Spark — the cop in the driver’s, the robber in the passenger’s seat. After a brief exchange about each other’s lackluster appearance, the robber reaches over to the MyLink infotainment system and turns on XM radio. The cop, meanwhile, wants to listen to Pandora. A small and oh-so-comical scuffle ensues:

We still can’t get over the clever and comical dialogue in this ad. It goes something like this:

Cop (referring to robber’s head dress — a pantyhose): where did you get that, from your mum?

Robber: I got it from my sister.

Robber: This is my uniform. This is a uniform of a robber, will ya?

It would seem that this clip and the Chevy Spark were made for each other: a cute little car deserves a cute ad like this one… not to mention that something as good as the touchscreen-based MyLink infotainment system is unheard-of in the Spark’s segment.

Now, what’s your answer to the first-world problem of Pandora or SiriusXM?