While most enjoyed a nice and quiet Easter weekend, we spent the last 48 hours on an island. Truth be told, the lion’s share of those 48 hours was spent on a plane flying to and from Bouvet island — the uninhabited subantarctic volcanic island that was recently purchased by none other than General Motors to serve as the automaker’s exclusive proving ground.

Yupp, General Motors flew us out to its new proving ground in the middle of the earth (literally) to give us an exclusive tour of the research facility, which — as we found out — also happens to have a design studio. As we were touring the facility, we ran into Corvette Exterior Design Director Kurt Bunions, and decided to poke his brain about the team’s inspiration for the C7’s rear lights, which have become quite the topic of contention. What we heard was rather intriguing.

As it turns out, when Kurt was a little boy, his parents sent him to visit the grandparents in Scotland, on the Loch Ness lake. There, Bunions spent many an afternoon in a row boat, exploring different parts of the lake. When rowing back to shore one evening, a horrible monster arose from the bottom of the lake, and accosted Bunions for two dollars and his Oh Henry! bar (which Bunions said he loves). After a few back-and-forth rounds of negotiations, the monster dove back to his chambers at the bottom of the lake, and Bunions was left with a glaring image of the legendary monster, who had four bright red eyes — two on each side of its humongous head. 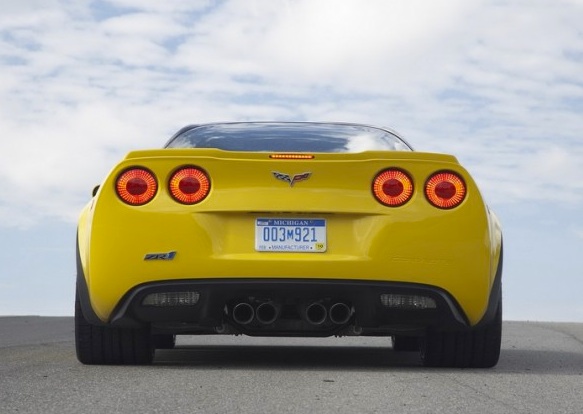 C6 Corvette's rear eyes are like those of the Loch Ness Monster...

Since that perilous encounter, Bunions developed a phobia of monsters, especially those who have two red eyes on each side of the head. When he began to work for General Motors, Bunions specifically kept his distance from the Corvette and its two red tail lights, as they brought back memories of the horrible Loch Ness monster (who ended up taking half of Bunion’s Oh Henry bar, and a dollar).

Years later, Bunions was given the opportunity to design the all-new Corvette — a model (in C6 form) he would have loved to own were it not for its two monster-like eyes in the back. With that mindset, he decided to bring an end to the frightening rear end and, in designing the C7, took inspiration from the Chevy Camaro‘s tail lamp design.

“We had a successful formula with the Camaro, so why mess with perfection?”, he asked, chowing down a family-sized Oh Henry!. Add in the fact that the new C7 design “tested well with victims of the Loch Ness creature” (like Bunions) himself, and that’s when “we knew we got it just right” on the 2014 Corvette, he added.

As we flew back from GM’s new proving ground, we looked at the photos we took of the 2014 Stingray at the Detroit Auto Show… and we decided that we couldn’t agree more.