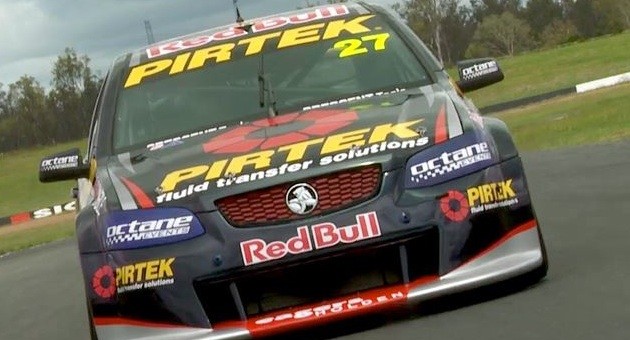 A speed competition recently took place at the Australian Grand Prix in Melbourne (Australia, duh!) between the Red Bull F1 car, a factory-spec Mercedes SL63 AMG, and a”production racecar” Holden V8 Supercar… and the results are rather eye-opening.

Those not familiar with F1 cars, here’s a brief synopsis: they’re stupid fast, have 2.4 liter engines that can rev to an unreal 18,000 rpm, and have about 700hp. And when that 700hp gets you into trouble, there’s some crazy fighter jet-like aerodynamics to save you from impending automotive doom.

Meanwhile, the Holden V8 Supercar is (more or less) based on a Commodore, does not use an LS motor (sad face), instead making do with a fuel-injected 5.0L small block, and cranks out nearly 600 horsepower. This is the exact car that Team Red Bull uses in the Dunlop V8 Supercar Series.

In the chase, the Mercedes went first with a 16.8 second head start on the Holden. The Holden V8 Supercar was given a 23.9 second lead ahead of the Formula One car. But the early starts were to no avail to either the Benz or the Holden, as the F1 quickly made up the 40 second gap between itself and the Mercedes, and crossed the finish line first, with just three-tenths of a second between the three cars. The Mercedes and the Holden seem to have tied.

What’s truly amazing is how much faster an F1 car is in comparison to a top-of-the-line Mercedes-Benz SL AMG, and a modified Holden Commodore — cars that are known to be fun-to-drive and fast on the street. Consider us “put in perspective”.