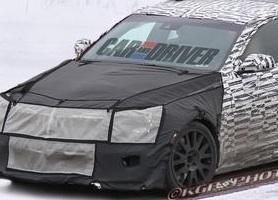 The fine folks at Car & Driver have caught and photographed a development prototype of the 2014 Cadillac ATS-V — the high-performance variant of Caddy’s sport-luxury compact sedan. Like its bigger CTS-V brother, the ATS-V will sport performance-focused suspension, drivetrain, and styling, all in an effort to dethrone the BMW M3, Mercedes-Benz C63 AMG, and Audi RS4/5 as the kings of the compact performance-luxury hill. And if the CTS-V taught us anything, it’s that The General can definitely hold its own against German rivals.

Looking at the photos, the testing unit has a low front spoiler and a huge central intake complemented by secondary intakes/fog-light housings. It also seems that the unit caught here has wider front and rear fenders than the non-V ATS available today, allowing the fitting of wider tires that should help in providing more grip, especially in the rear.

Speaking of the back, the exhaust system on the tester unit clearly sports four outlets — a first for a V-model Cadillac sedan. With the exception of the XLR-V, which had a quad-exhaust system thanks to its Corvette roots, all CTS-V units to date have had a dual-exhaust setup. To note, BMW’s M cars have utilized quad-exhaust systems for nearly a decade.

As with the non-V ATS, the Alpha-based vehicle will have a very balanced chassis and driving experience. Expect the ATS-V to be powered by GM’s new twin-turbocharged 3.6 liter V6 engine (LF3?) making somewhere in the vicinity of 400 horsepower, with The General having tested both the boosted six and an eight-cylinder small block in the car. It ultimately decided to use the smaller boosted unit to lie at the heart of the vehicle driving the rear wheels. For reference, the naturally-aspirated 3.6 liter V6 (LFX) pushes 320 horses in the ATS.

The ATS-V will make its debut in 2013 (probably at the LA Auto Show in November) and go on sale in the first several months of 2014 with a starting price of around $60,000. Anyone want to go halfsies?

Head on over to C&D for the full gallery.