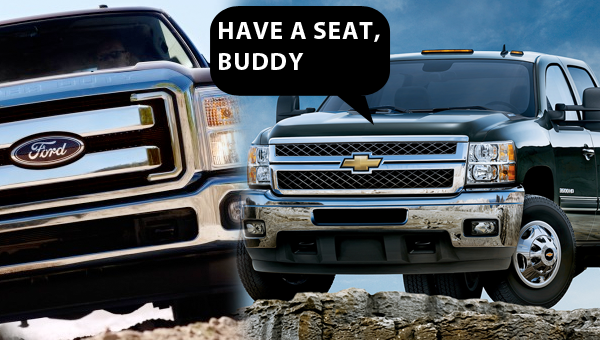 For the last model year of the Chevrolet Silverado HD before switching to an all-new architecture, General Motors has bumped up the truck’s maximum tow rating to an amazing 100,001 pounds for the 2014 model year.

“Since Toyota thought they were sooooo cool after towing the space shuttle with a chintzy Tundra, we felt confident enough in the Silverado HD’s abilities to change its max tow rating to just over 100,000 pounds”, stated Chevrolet communications manager Mark Albino, who gave us the scoop on the adjustment during the 2013 New York Auto Show last week, on the condition that we pay for his cab ride. “We added that one extra pound in case those bastards at Ford got wise and tried to copy us. We still wanted that extra pound for the consumer to see.”

No changes were made to the Silverado HD’s frame or engines, including the proven Duramax diesel engine and Allison transmission. Mostly because GM felt that it didn’t need to make any changes.

“You can pretty much say you can tow anything these days,” said Cleatus McKenzie, Chevrolet Silverado PR manager, who also has a phobia of lemurs, we found out.