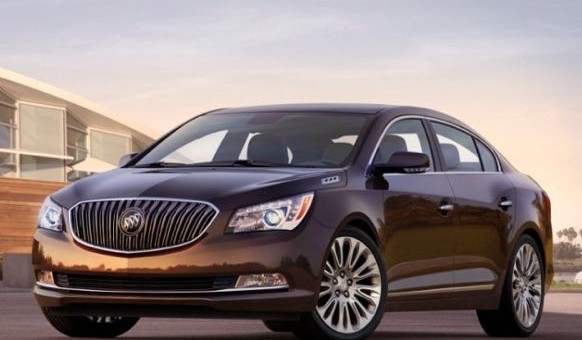 With Buick showing off not one, but two vehicles at the 2013 New York International Auto Show, it’s understandable that The Tri Shield brand would tell all on at least one of the vehicles before the media begins its migration to the Javits Convention Center. And the first vehicle brand has chosen to reveal is the restyled 2014 Buick LaCrosse.

The exterior changes are modest, but in the very best ways. Altogether, the revised grille, LED-infused headlamps and new taillamp design give the 2014 LaCrosse a more polished and elegant look than before. There’s also the addition of optional 20-inch wheels. The same manner of subtle changes are found in the interior.

Consisting of new seats with the vibrating Safety Alert system, higher-quality materials, a redesigned central instrument panel and console, and an all-new, available Ultra Luxury Interior Package, the cabin of Buick’s flagship sedan looks to raise the bar in what it means to own a Buick in terms of refinement. The 2014 LaCrosse also introduces the next-generation IntelliLink system, with an eight-inch color touch screen, swipe recognition to improve navigation (like CUE), and the reduction of buttons from 17 to only seven. The system can store up to 60 favorites, which can include radio stations presets, phone contacts, navigation destinations and music from other media. Seven speakers are standard, with an 11-speaker Bose system being optional.

Those opting for the Ultra Luxury Interior Package in the 2014 Buick LaCrosse will find Sangria colored semi-aniline leather seats complemented by Shadow Tamo Ash wood accent paneling. A total of four interior trim/color combinations will be available for the 2014 LaCrosse.

On the safety side, the 2014 Buick LaCrosse offers the radar-based Adaptive Cruise Control system, like its siblings, the 2013 Cadillac XTS and 2014 Chevrolet Impala. When engaged, the system is able to adjust the speed of the 2014 LaCrosse including stopping the vehicle in heavy traffic and accelerating once traffic begins to flow. The camera-based Forward Collision Alert and Lane Departure Warning also make an appearance, as does Lane Change Alert, which warns the driver of fast-approaching vehicles in the next lane that are up to 230 feet (70 meters) behind the car. Comprehensively, Buick will offer two packages for the safety systems.

Under the hood, buyers can still find the familiar 2.4L Ecotec with eAssist that gets 36 mpg highway, and a 3.6L V6 engine (LFX) with 304 horsepower. Both engines are matched with a six-speed automatic transmission, and both powertrains do well in regards to offering customers either power, or efficiency.

We will be able to provide more in-depth coverage of the 2014 Buick LaCrosse when we come face-to-face with it Tuesday morning.