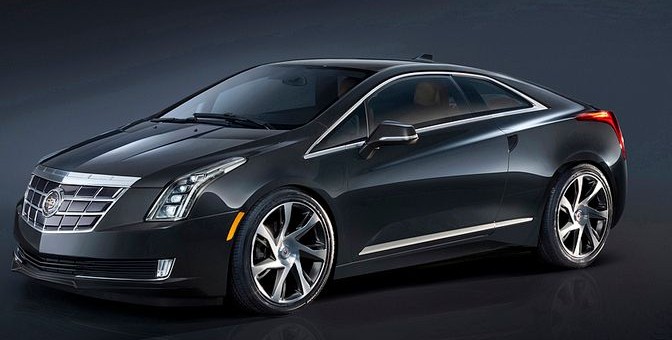 We’ve been teased, seen spy shots, and even seen leaks ahead of today’s official announcement. But the 2014 Cadillac ELR is finally here. The new luxury coupe is first in that it’s the first application of an extended range drivetrain by a full-line luxury brand. Other than that, it’s pretty much the Converj concept — with usable side mirrors and a realistic interior.

The ELR is powered by an EREV propulsion system with a range-extending 1.4L gasoline-powered electric generator. If that sounds familiar, that’s because the same powertrain can be found in the Chevrolet Volt.

Total range in the ELR is expected to exceed 300 miles (480 km), with roughly 35 miles (56 km) of pure electric driving — depending on terrain, driving techniques and temperature — estimated by GM.

We will see the ELR in person tomorrow at the North American International Auto Show, and will have a few videos to show you after that, as well.

The Cadillac ELR will be a specialized vehicle that is produced in limited quantities.

“ELR marks a fresh, even surprising new dimension of Cadillac,” said Cadillac global vice president Bob Ferguson. “An additional aspect of ELR’s appeal to will be exclusivity. It will be a specialized offering produced in limited numbers.”

The Cadillac ELR will commence production at GM’s U.S. Detroit-Hamtramck plant (shared with the Chevy Volt and Impala) in late 2013, with sales starting in early 2014 in North America. Sales will then expand to global markets, including China and Europe.