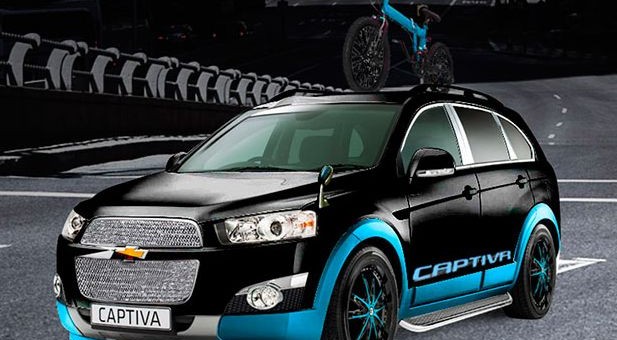 It’s been a while since Chevrolet made an appearance at the Tokyo Auto Salon. And judging by the dismal sales figures for the brand in the region, it’s easy to understand the lack of effort. But in any case, Chevy is overdue for some much-needed exposure in the Land of the Rising Sun, and looks to make a splash during the 2013 show, which happens January 11-13, just before the official start of the 2013 North American International Auto Show in Detroit.

While information is extremely limited at this time (and only readable thanks to Google Translate), we are able to make out that there will be a trio of Chevy concepts, which are a Camaro, Captiva and Sonic.

All we currently know about the Camaro is that it features a set of Giovanna wheels, and that’s about it. As for the Captiva, it goes by the official name of “Captiva Freedom Rider”, and is equipped with 20-inch Gianna Crown wheels and sports a carbon flash metallic hue complimented by sky blue fenders and side skirts, and a roof-mounted bicycle to match.

Lastly, the Chevrolet Sonic Street Icon features an aggressive red and black getup, and is meant to appeal to the “street generation,” or something like that.