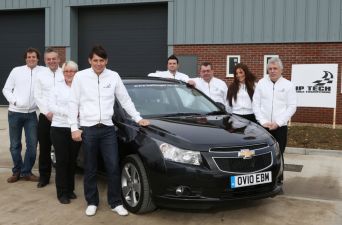 When the next season of the British Touring Car Championship kicks off this March, it will feature a new competitor in a Chevy Cruze. 38 year-old Andy Neate will field a NGTC (Next Generation Touring Car) Cruze sedan under his newly-created IP Tech Race Engineering Team.

Neate, who has raced for three different teams since making his debut in the circuit in 2010, will ‘go it alone’. He will, however, be joined by BTC Racing’s Chris Stockton in a Cruze hatch.

“If there is one thing I know it is how to put together a really good team of people – my long-time engineer Phil Overall as well as Jeff Kingston, who was part of the WSR team when it won the title in 2009, are already on board and in fact it’s the same calibre of person at every role.”

“I have absolutely no concerns at all either about the build quality and strength of the Cruze. RML, who have run Chevrolet’s title-winning World Touring Car programme for the past eight years, have fabricated the car, although we will do the rest ourselves”, said Neate — referring to the Cruze dominance at WTCC, an event that Chevrolet has (for some reason) pulled out of (perhaps they got tired of winning).

Neate also added that he and his team will go “to town on perfecting the aerodynamics side of things…”. “We also plan a bespoke RML-tuned engine based on the engine that ran in the Cruzes when the model previously raced in S2000 specification.”

“We will build two cars this season but the priority is to get the first car up to speed and reliable so I can do myself justice. The new workshop is top notch and everything about this project already shouts ‘success’.”

At the 2008 Britcar 24 Hours at Silverstone, Neate was involved in a serious accident in that left him with a broken neck, among other injuries; he spent the next eighteen months recovering from this injuries.