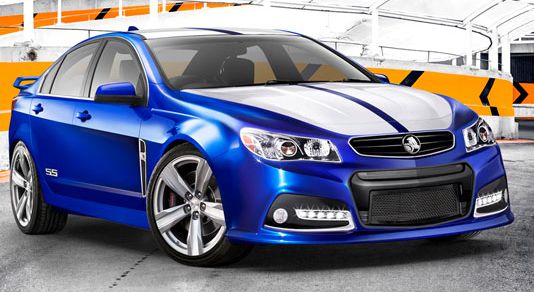 “We will fill the orders of people who want one instead of declaring some kind of production volume and trying to fill it from across the ocean”, said Reuss following the launch of the Chevy SS NASCAR series racer at the end of November in Los Angeles. Reuss did, however, put a number on the overall production volume, but said that GM will sell as many SS units as the market demands: “It’s going to be a relatively low-volume—probably between 10,000 and 15,000 units—but we really don’t know because we’ll make as many as we sell,” Reuss said. “There’s no target, there’s no goal. We’re bringing the car here to go racing. That’s the No. 1 goal. It will be a halo for Chevrolet. We really don’t have a high-performance four-door sedan in the lineup. It fills that niche. We’ll make as many as people want.”

“Anyone who has the right amount of money and shows up in a Chevrolet dealership, we will sell them this car,” Reuss said. “You don’t want to over-think this stuff. We haven’t focus-grouped it. It’s going to be a really good car. People are going to want it.

Manufactured in Australia and based on the VF update to the Holden Commodore, the SS will commemorate Chevy’s first rear-wheel-drive sedan on sale in the United States in 17 years. We expect the beast to at least cradle GM’s all-new fifth-generation small block engine, the LT1 — which will serve as the standard engine in the C7 2014 Chevrolet Corvette.

With its NASCAR racer, the production-spec SS sedan will attempt to bridge the gap between Sunday races and Monday purchases, allowing the “win on Sunday, sell on Monday” adage to apply to the Bow Tie brand.

“We’re thinking about the Chevrolet showroom,” Reuss said. “We have no sedan that is a high-performance sedan. That’s the void that the SS fills. We’re not going to rank order of performance by model or any of that stuff. The Corvette will naturally always be the fastest high-performance thing we do. When you start laddering performance, it’s a very dangerous game.

All of GM’s previous NASCAR entries, including the Impala and Monte Carlo, were drive by the front wheels.

It’s great to hear that GM isn’t setting a production cap, even though the sales volume for a vehicle such as the SS will not exceed the monthly sales of a Chevy Cruze. But it’s this statement that makes us even more impatient for the February unveiling of the SS at Daytona: “This will be a very special car for Chevrolet,” Reuss said. “This will be a pretty special SS.”

Now if only GM could recognize the opportunity of a compact high-performance offering (like a Cruze SS). Wouldn’t that be the bee’s knees?