Australia may not be anywhere close to being GM’s biggest market, but at the same time, it holds a few exclusive and coveted vehicles. And while people of Oz may refer to one of their gems as the Holden Commodore, we Americans all-too-briefly knew it as the Pontiac G8, whereas Great Britain recognized it as the Vauxhall VXR8. Sadly, those days are gone.

Soon, however, the United States will get re-acquainted with Australian culture in the form of the Chevrolet SS, which will be a high-end derivative of the upcoming Holden VF Commodore sedan. But as many of you readers know, the Commodore also comes in sport wagon and ute variants, and not just a domesticated four-door. This is where things get interesting.

While we don’t know outright if the same plans are in store for the Chevrolet SS, we do know the following: General Motors filed a trademark application with the United States Patent and Trademark Office on May 22, 2012 for the “Nomad” name — a moniker that was a rear-wheel-drive, V8-powered Chevrolet station wagon from a few decades ago. So even though we have yet to hear official confirmation from The General, evidence is beginning to mount that the U.S. market is in store for a Chevrolet that can lay down fast lap times as well as it can carry $400 of groceries from Costco.

This latest word should help heal the wounds from the news that the Cadillac CTS Sport Wagon — and thus the CTS-V Sport Wagon — is being discontinued. Indeed, a new Chevrolet Nomad would be quite a treat for enthusiasts, and will hopefully turn more consumers to think differently about station wagons.

Another thing we await is the return of the Chevrolet El Camino — which has been rumored to be coming back for a few years now. 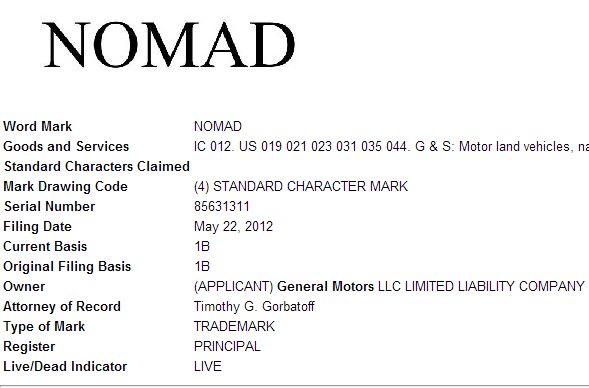