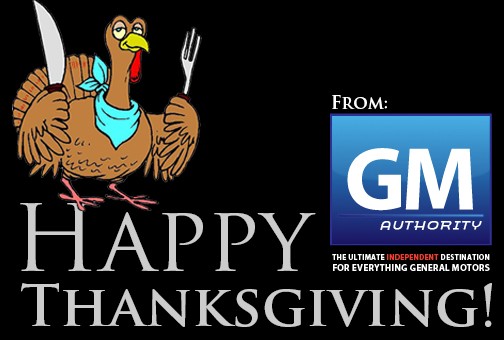 It’s been an eventful year here at GM Authority. We’ve experienced significant growth in 2012, overhauled our technical infrastructure, and are continuing to work on a few projects the details of which we’ll be able to share shortly. And with the end of 2012 rapidly approaching, we’d like to share what we’re thankful for here at GM Authority this Thanksgiving.

Each and every day, we are reminded that GM Authority wouldn’t be possible without you — the reader. You’ve shared our content with your friends, told us what we’re doing right, how we can improve (more on that in the next month), and — most of all — you’ve helped us shape GM Authority into the best GM community on the web. Thanks for being a part of the fastest-growing GM community on the planet — and thanks for telling others about us. It means the world to us.

2. The General & Its Employees

You may not know it from reading GM Authority on a daily basis, but we interact with GM’s Communications Team very frequently. From asking questions and clarifying statements to securing our spots on media events and press vehicles, GM’s team of media relation pros has been very helpful — and for that, we’re extremely grateful. Of course, a comment from Mark Reuss (and other GMers) helps now and again, as well. And where would we be without the men and women in offices, plants, suppliers, and other disciplines of the industry that help make the GM automobiles we drive today? To all of those who are involved with The General, thank you.

From the all-new GM small block to the upcoming Chevrolet and Cadillac product offensives, we’re thankful for the privilege to cover such a dynamic and exciting automaker… and we wouldn’t know what we’d do if we had to cover a more boring manufacturer like Toyota. Oh, and the fact that the all-new 2014 Silverado and C7 Corvette are right around the corner makes us all giddy inside.

You have no idea how many non-GM cars we’ve driven over the past two years that were full of unwanted noises, including rattles and squeaks. The fact that GM has an entire team of engineers dedicated to removing these pesky sounds from the cabins of its vehicles means the world to us. And even though other have introduced competing offerings that do their best to copy OnStar, we’re still thankful to be able to use of GM’s telematic arm in the best-made vehicles around the world. And that RemoteLink app, and upcoming EV-focused updates to it, are simply the bee’s knees.

We’ve never used one of these Power Gloves, but have heard that they are very effective in manufacturing. And so we’re thankful for the production prospectives offered by the glove… and for the potential to deliver bone-crushing handshakes, as well.

All that is to say Happy Thanksgiving! What are you thankful for this season?