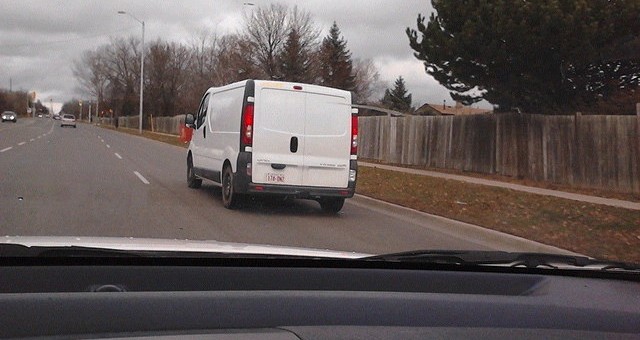 Earlier this week, GM Authority reader Everton saw an Opel Vivaro traversing the streets of Oshawa, Ontario, Canada. The van wasn’t camo’ed or wrapped, with the Opel logo and nomenclature clearly visible. Coincidentally, the van was spotted near the headquarters of GM Canada and wore the 2900 insignia on its fenders, representing the 2900 kg gross vehicle weight rating of the van. Most interesting of all is the fact that the van contained several instruments attached to the dash, which we’re assuming to be development and calibration equipment.

So, what’s a Euro-market Opel/Vauxhall doing in North America? We can only guess that it’s undergoing some kind of testing. Fortunately, we’re aware of a few facts that might help us answer this question without too much guess work.

For starters, we’ve known that GM’s line of (rather outdated) full-size van offerings in North America — the Chevy Express and GMC Savana — will be replaced at some point in the future, especially now that Ford has come clean about its plans to bring its full-size Transit to North America (as the T-Series) and Mercedes has been having moderate success with its Sprinter. And while the Vivaro may fit the bill on the low-duty end of the van spectrum, the Renault-designed van falls short when it comes to the Heavy Duty segment: it isn’t available in a dually and its most powerful engine, a 2.0 liter turbodiesel, tops out at 84 kW (112 hp) and 290 Nm (213 lb.-ft. of torque). That’s not to say that GM can’t fit in a new mill under the Vivaro’s hood were it to make its way to the New World… but it seems that such a vehicle would still pale in comparison to the offerings from The Blue Oval and The Pointed Star. As such, we’d rather have GM bring over the much more capable Opel Movano (which also happens to be Renault-designed).

That said, the Movano may not necessarily be a replacement for the Express/Savana twins, but rather a midsize (rather than a fullsize) offering. It could even be the vehicle for which GM is acquiring the Citi Express trademark. However, the present Vivaro is much larger than something like Ford’s Transit Connect and the WSJ has reported that The General has no plans to compete in the compact van segment.

Yet even if GM is, indeed, testing the Vivaro for eventual sale in North America (for whatever segment or customer), we wonder why it’s doing so now — as the Vivaro in its current form has been in production since 2001, and is slated to be replaced for the 2014 model year. For its part, Opel has already committed its Luton plant in England to build the next-gen Vivaro. As such, it could be that GM is simply testing the next-gen Vivaro using the body of the current van; this theory makes the most sense to us, given that GM is looking to increase the globalization of its vehicles while reducing complexity. But where would that leave GM’s new alliance with Peugeot-Citroen, which has its own line of van offerings? Of course, there’s the possibility that we’re reading too much into this, and the Vivaro seen here was simply an imported unit…

What do you make of the spotting of this Euro-only van (with testing equipment) in the States? Sound off in the comments below.

The Vivaro full-size van was born thanks to a joint venture between Opel/GM and Renault. It was designed and engineered by Renault in France, and is manufactured by Vauxhall in England and by Renault in Spain. Renault’s version of the Vivaro is sold as the Traffic, while Nissan’s is called Primastar. The vehicle is offered in panel and passenger van configurations while offering a choice of two 2.0 liter diesel engines mated to either a six-speed manual and automatic transmission. The powertrains fit the Euro 5 emission standard.